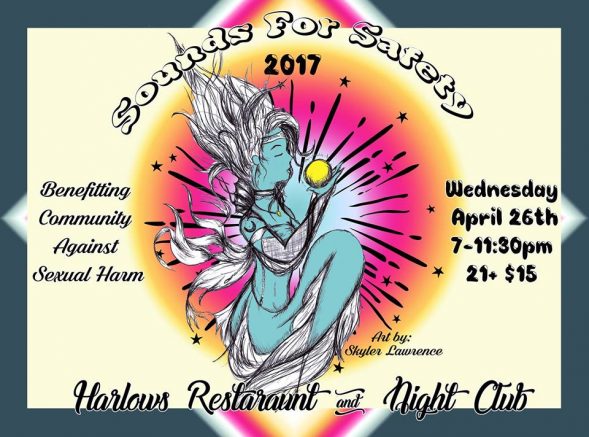 All leftover proceeds from the concert will go to the nonprofit Community Against Sexual Harm. (Photo courtesy of Bryan Herndon)

Someone very dear to his heart is involved in the world of sex trafficking, she has been a sex worker since she was 14 years old; she is what inspired him to spearhead the benefit concert, Sounds for Safety.

Bryan Herndon is one of the lead organizers for Sounds for Safety. The event, which includes a performance from an ARC student,  “aims to strike a balance between an informative and fun night,” according to Herndon’s summary on its Facebook page.

ARC alum James Ballas was a volunteer for Sounds for Safety last year and he will be volunteering again at the upcoming show.

“I volunteer because of what Sounds For Safety has been doing with the funds they raise,” Ballas said.

The lead lineup is all women with featured male musicians such as guitarist/singer Jordan Moore.

Moore is a local Sacramento musician who will be playing guitar for poet Grace Loescher.

All leftover proceeds from the concert will go to the nonprofit Community Against Sexual Harm.

CASH strives “to assist women that have been commercially sexually exploited through survivor-led peer support and harm reduction services, while providing education about the harm inflicted on women and the community,” according to information on the organization’s website.

“They raised $1,500 dollars last year for community against sexual harm, and that was enough to get three women who had been involved in sex trafficking [to get] the help they needed to get back to their families,” Ballas said.

This nonprofit was “created by Sacramento Police officers, former sex workers, professors, Oak Park residents and a business district,” according to CASH’s website.

At the show there will be a unique blend of local poets live music and “two live painters on one massive canvas,” Herndon said.

Herndon has similar artists on his list like Moore. People who “offer a message of hope, strength and upliftment,” Herndon said.

Although Herndon says he wants to “strike a balance” he still wants a message to get across: His “goal [is to] give the women on the streets of Sacramento some options beyond the very limited ones, in the dark world of sex trafficking,” Herndon said.

Herndon added that he knew what he wanted readers to understand, The “average lifespan of a victim is reported to be 7 years (found dead from attack, abuse, HIV and other STD’s, malnutrition, overdose or suicide,)” according to Ark of Hope For Children’s website.

Although these are dismal and bleak facts, they’re “actually helping people in our community leave a very dark chapter in their lives, and “this year they are projecting an even higher amount [profits raised], which will help even more women get off the streets,” Ballas said.

Tickets are available at www.ticketfly.com

For more information about CASH go to www.cashsac.org

The full lineup is as listed below.

Opinion: The importance of staying informed