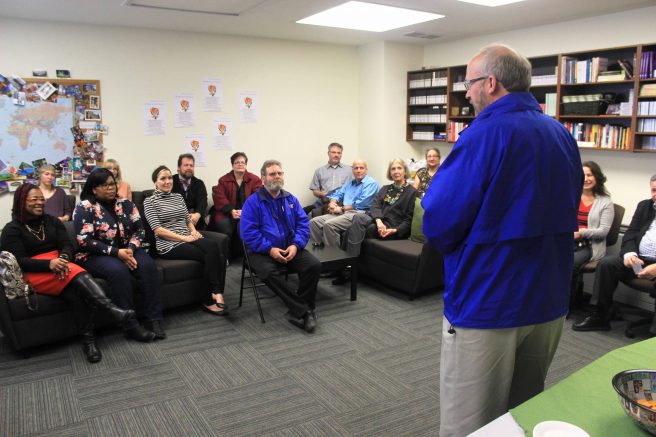 Craig Weckman gives a speech for his award. The reception for faculty award winners was held in the CTL conference room on the third floor of the library, on Jan 26th. (Photo by Jared Smith).

An award reception was held in the ARC library on January 26 in honor of six faculty members who won the admiration and respect among their students and fellow peers.

Each recipient gave a brief speech after being commemorated by a colleague in the department they work in.

There was six honoraries ranging from Early Childhood Education to music.

Kathleen Cronin was at the event during which she honored math professor Jones with the “iTap” award in which students vote for the faculty member.

As a math professor, Jones teaches many different math classes, including arithmetic and calculus. Additionally, he is on the curriculum committee and on the review committee.

Cronin stated that the International Teachers Assistance Program (ITAP) award was given to Jones May 13, 2015.

The award was created by Walter Decker from the math department according to Cronin.

This award was given to Jones through student votes.

“I put a ballot box on the front desk and from February to July, about 300-400 students voted,” Cronin said. “Those who do vote get their voice heard.”

Cronin said that students voted for Jones because he gave feedback, discussed ideas on which classes to take the upcoming semester, and was “multidimensional in working simultaneously because he has triplet daughters and one boy.”

Jones said he admires working at a community college that supports each other and is humbled being at American River College.

“I absolutely love my job and working at ARC,” Jones said.

Dean of Technical Education, Trish Caldwell was in attendance at the reception award, and spoke about her colleague’s accomplishments while trying to hold back tears in her eyes.

Kathy Carter-Wilson, who worked at ARC for 23 years, said she was “humbled and honored” to be nominated by her colleagues on behalf of the ECE department.

“I never look for accolades,” Carter Wilson added, saying that she just enjoys doing her job.

Additionally, Alina Cervantes, Jan DeLapp were also honored from the dean of the ECE department.

Honoree Portia Njoku had gave credit to the music department during her speech.

“I love the community, I love the students, I love being a role model. I wouldn’t be able to do the things I do without the support of the staff, they’re like my family.” Portia said.

Portia stated that she had an opportunity to go to an National Public Radio (NPR) conference in Cuba but opted out to stay and continue her teaching.

“[I] tell students you need to hone your skills so you can be reliable,” she said.

The honorees were each gifted with purple orchids that previously decorated the room during the reception, after the awards were announced and speeches were given.