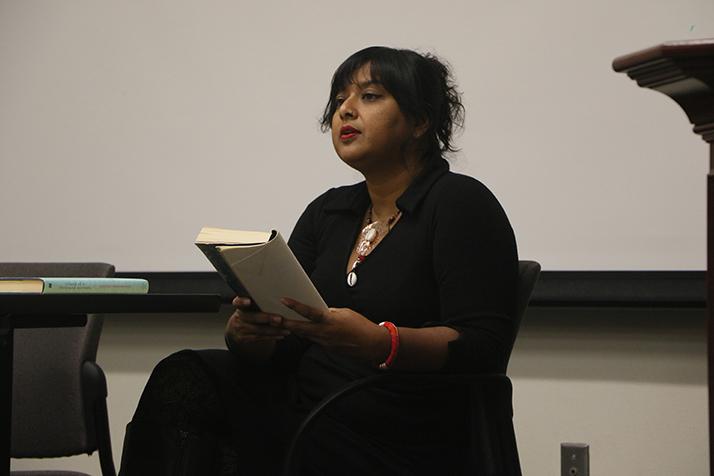 Sri Lankan novelist Nayomi Munaweera reads a passage from her book “What Lies Between Us” during a College Hour at ARC on Nov. 1, 2016. Munaweera talked about the influence she recieved for writing her two novels. (Photo by Mack Ervin III)

Tuesday’s college hour commenced with Sri Lankan novelist Nayomi Munaweera reading from her second book, “What Lies Between Us.”

“As a person of color I feel like it’s my responsibility to represent,” said Munaweera.

Munaweera’s book is centered around the immigrant experience, feminism and the Sri Lankan Civil War.

“I was looking at the war through the eyes of women. Usually the war is looked at through soldiers and men. But I wanted to focus on how women are affected,” said Munaweera.

Munaweera writes about her interest in patriarchy and misogyny.

“This book talks about the consequences of misogyny and how it affects all kinds of women,” said Munaweera.

As a writer, Munaweera enjoys writing in first person because of the level of intimacy it embodies.

“People say writing in first person is like being a ‘freshman,’ and then you graduate to third person, but I don’t think so,” said Munaweera.

Audience member and ARC student Abidah Kaur voiced her feelings about Munaweera’s book and how brave she thought the novelist was.

“This book is so controversial because instead of focusing on how war affects men, she’s brave and focuses on women,” said Kaur.

The audience was filled with young writers.

“As a writer I can appreciate the first person narrative. It makes me feel more connected with the author,” said ARC student Mahwish Singh.

Munaweera was fearful that people would condemn her for writing this book.

“I’m not a sexual assault survivor and I’m not even a mother, but people loved it,” said Munaweera.

After the short question and answer segment of the college hour, Munaweera signed books for students.