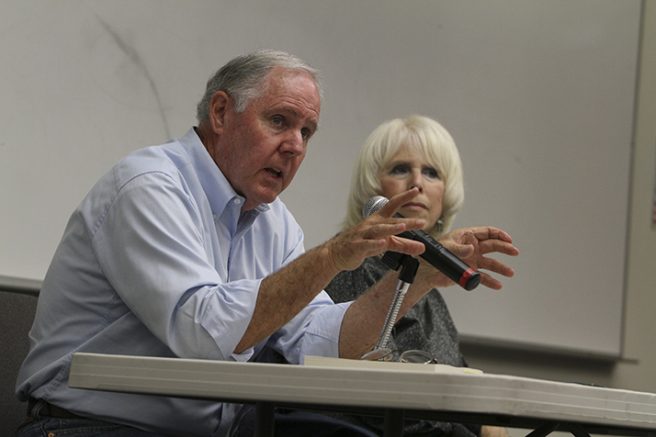 Authors Steve and Susie Swatt talk about California politics during a College Hour speech on October 25, 2016 at ARC. The Swatts talked about historical propositions in relation to the 17 propositions on this year’s ballot. (Photo by Mack Ervin III)

In a crowded classroom in Davies Hall, Steve and Susie Swatt, a former journalist and legislative aide, respectively, informed students about not just their place in the 2016 elections, but in California history.

The Swatts are co-authors of a book on California politics called “Game Changers: Twelve Elections That Transformed California.”

They travel the state educating students on the history of these elections, and their long term-ramifications, many of which are still being felt today.

“The millennials can be hugely powerful if they get together,” said Steve in an interview after the class. “Get your friends together, get on social media and make a change.”

Historically, due to a lack of education on the political and electoral process, young people have often held the opinion that their votes are unimportant. In this election though, the environment is changing.

“There’s a level of engagement that hasn’t been there before,” said political science professor Tressa Tabares, whose class was present for the guest speakers. “People are more interested in the process.”

With more tools to spread their thoughts than ever before, young people have the potential to change the face of the election.

“There’s a myth that voting doesn’t matter or count,” said Tabares. “Don’t buy into that. That thought alone is the biggest hurdle.”

For students in the Swatts’ audience, that myth has become more fact than fiction.

“For my friends – those who aren’t going to vote because California is a blue state, and they think it doesn’t matter, what do you tell them?” said Rachel Davis, an ARC student.

This is a question that has echoed through not just the halls of ARC, but the minds of Californians for decades.

The use of the political process as a platform to voice opinions is one California has an enthusiastic relationship with – this election cycle, there are 17 initiatives on the ballot.

Initiatives are part of a multi-step process that empowers citizens to bring their issues to the ballot, according to the National Conference of State Legislature.

According to Steve, getting involved in politics can be as simple as asking, “What is going on in the world that is bothering me, and who can change it?”

The grassroots approach – getting together friends or like-minded people, and finding new approaches to the changes one wants to see, is not a new strategy, but with the addition of social media, the propensity to go viral amplifies any conversation.

Amplification is exactly what the so-called “down ballot” – everything below the presidential options – needs.

Unfortunately, it’s also the part citizens are least educated on, despite the bombardment of advertisements and propaganda hurled at them during the election cycle.

“I like to pick up a newspaper, and just really trace back to the source,” said Susie, when asked by a student how she sorts through all the information. “It’s not easy, but it’s effective.”

Politics can be a lot of things, including complicated, crowded and convoluted, but they can also be changed on November 8.

Be the first to comment on "Young voters can be heard, if they vote"