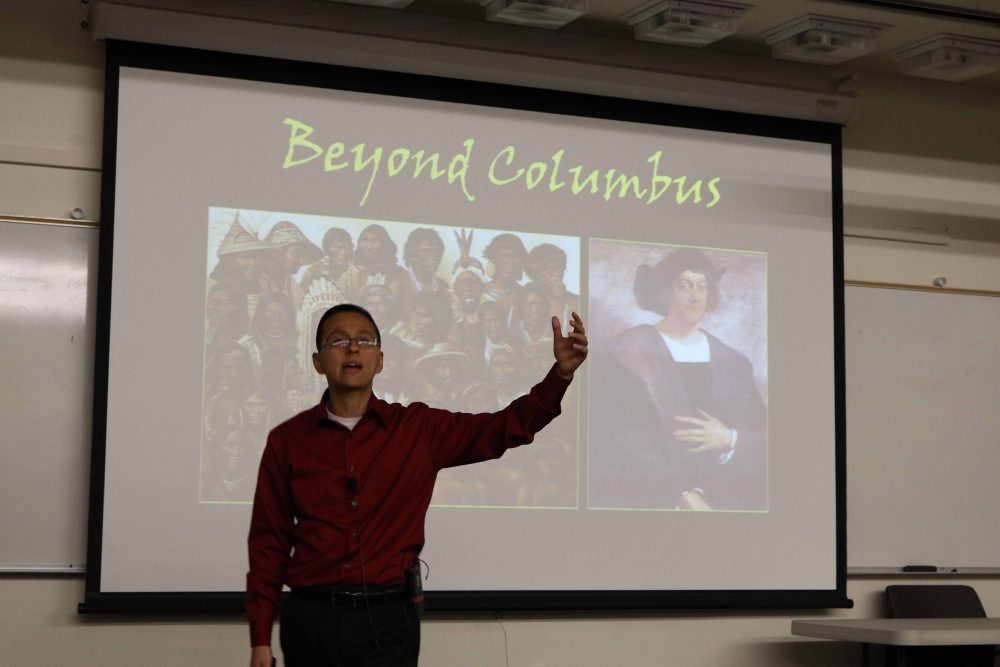 Professor Caton introducing himself in Raef Hall on October 11th, 2016, presenting that Beyond Columbus is far way more than what we know.

‘Beyond Columbus,’ was presented by Professor Ricardo Caton which focused on the myths surrounding Christopher Columbus and his agenda at a college hour on Tuesday.

Lately, many of the college hours at ARC have had poor turnouts, but this event seemed to grab the attention of several students.

Caton referred to ‘Columbus Day’ has the former commemoration of the discovery of the Americas, but now it is beginning to be referred to as ‘Indigenous Peoples Day.’

“Columbus’ intention was gain to wealth and monopolize the western route to Asia to gain a profit,” Caton said.

Caton proposed a question to the audience.

“If Columbus discovered America then why aren’t we called ‘Columbians’ after Columbus?”

Amerigo Vespucci discovered that America was a new landmass and he is who America is named after.

Caton used a powerpoint slideshow to educate the audience on who actually discovered America.

Professor Caton tackled the idea that contrary to the myth that the Native Americans who were already living in the area that Columbus ‘discovered’ were “unruly and living without government. These people had one of the most successful working civilization in the world’s history.”

Columbus brought Christianity to the Native Americans to help educate them and give them order.

“It is ironic that they are claiming to be Christians. It’s like terrorists who say they are Muslims. It goes against the teachings of Islam to kill to implement your agenda,” Caton said.

The El Requerimiento, which was implemented after 1512, was given to the Americans in order to keep them obedient to the church and allow to them to make slaves of the Americans.

The Columbian Exchange was the trading of goods that Native Americans did with the Europeans.

This was read to them in Spanish, a language they didn’t speak.

“The idea that Columbus coming to America was harmonious is a great myth,” Caton said.

The Native Americans were introduced to smallpox, a disease they were unfamiliar with, which resulted in mass murder.

There is a long-going argument whether this was mass genocide or mass murder, whether it was intentional or not.

“You couldn’t call on Native Americans to be slaves, so they got Africans to do their slave labor. Africans already had encounters with Europeans so they weren’t being affected by their diseases,” Caton said.

Caton asked the audience how should Columbus be remembered?

“He did awful things and I don’t want to celebrate him but the trading he did was obviously very essential in our history,” said Sierra Beltran, ARC student.

But most people learn about Columbus in grade school. Implementing the right knowledge into children will have the opportunity for them to learn the entire story.

“My daughter comes home and tells me that she is learning about Columbus in class,” said ARC student Maria Sepulveda. “I wanted to come to this college hour so I can have a better conversation with her about this.”