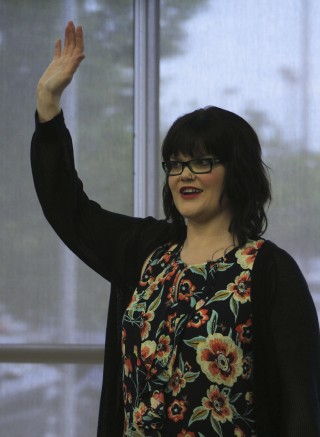 At the beginning of her success workshop’s second module, Barbie Paget posed an important question: “When you reach a major milestone in your life … now what?”

Paget, a certified master life coach, laid out the foundations of a negative environment with her own story. To care for her sick father, she moved across the country—away from her new car and her leased apartment—to help her parents, all while continuing to fulfill her duties as a business executive remotely.

She fell into depression and gained back some of the weight she’d previously worked hard to rid herself of, but discovered an idea in the downward spiral.

“I thought, ‘maybe I can totally change what I do,’” she said.

Through “Achievement Unlocked!: Now What?,” she tackled the topic of handling the major changes in people’s lives and the stress that comes with them.

According to Paget, the most critical thing to understand is that with larger changes or multiple changes, things won’t quickly resolve themselves.

“Stress is cumulative,” she said. “The most important thing to realize is that you have a lot of time.”

“The power of time is crucial—you want to be adjusted now. But navigating change takes time,” she said.

She went on to dealing with the difficulties that people have asking for help or even receiving it.

“The power of asking for help is a strength, not a weakness,” she said.

Paget said that feeling like a burden or being afraid is both a natural thing and wrong, emphasizing her point by flipping the perspective.

“People want to talk to you. They want to share,” she said.

She introduced an element of Korean culture to add to her point and how natives will correct others so that they don’t make the same mistakes twice, which is behavior that isn’t very popular in the U.S.

“If someone offers help, they meant it,” Paget said, reminding her audience of the two-way street. “It’s our job to follow up on the offer.”

She also made a point of connecting with others and networking as her final point of the module, citing her experience with the website LinkedIn and recommending what people should look for in their company.

“It’s about utilizing what you have and taking advantage of it,” Paget said.

Her suggestion was to always be with a group whenever its door was open and be consistent in order to forge a strong connection.

She also suggested finding two particular kinds of people; mentors and a champion, the latter of which she said was more difficult to find.

“A champion is someone in power who can argue a case for you,” Paget said.

She recommended trying to meet regularly with such a person to form a professional relationship with them.

Kamola Nazar, an ARC student, said that the most important thing she took away from the module afterwards was “learning how to ask for help.”

Vinson Saldivar—a student studying public relations at Sacramento State University—thought that Paget’s explanation of the power of time was the most helpful portion.

“It was pretty interesting actually, since I’m going through some things in my personal life,” Saldivar said. “It let me help (bring things) back into focus and let me know, ‘hey, it takes time,’ and to just look toward it and find people to reach out to.”