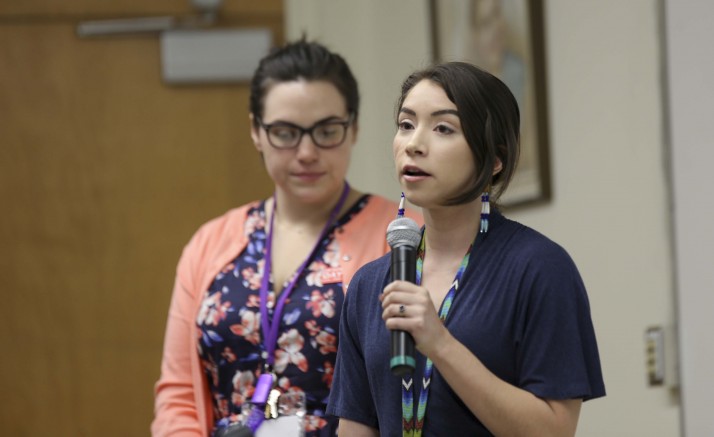 WEAVE representative Erienne Ramos speaks to the audience about consent during the college hour on April 19. (Photo by Kyle Elsasser)

Consent was the main topic the two WEAVE representatives discussed.

“Two-thirds of rape cases, the victim knows their perpetrator … 73 percent of those who are forced to have sex, don’t realize it’s rape … and 64 percent of transgender youth report being sexually harassed,” said Friedman.

Educating ARC students on the meaning of consent was the “main goal” of Friedman and Erienne Ramos, WEAVE representative and community educator,

“A lack of a ‘no’ doesn’t mean ‘yes’,” said Friedman. “Both involved individuals have the right to choose freely.”

Ramos explained to the audience the common phrases used to perpetuate rape culture.

“People often use sayings such as ‘what did you expect going upstairs with him’ or ‘she was dressed like she wanted it’,” said Ramos.

Coercion, the act of threatening, pressuring, blackmailing, guilt-tripping and intimidating, is often used when someone doesn’t give consent but still has sex unwillingly.

“The situation and the environment doesn’t speak for you … only you can give consent.” said Friedman.

Ramos explained to the audience that we live in “an era of rape culture.”

“Family Guy,” “Scrubs” and “How I Met Your Mother” were some of the shows shown that found humor in the lack of consent in engaging in sex.

“It’s important to learn about privilege and how it contributes to sexual violence,” said Ramos.

The WEAVE representatives also showed clips from television shows and movies that made several jokes about rape because “it seems to be funny when a man is raped because it’s almost unheard of.”

Some members of the audience answered the proposed question, “what are some things you do to prevent being assaulted?”

Friedman and Ramos closed the college hour by asking the audience to “view consent as a positive thing and understand that consent isn’t only for monogamous couples.”