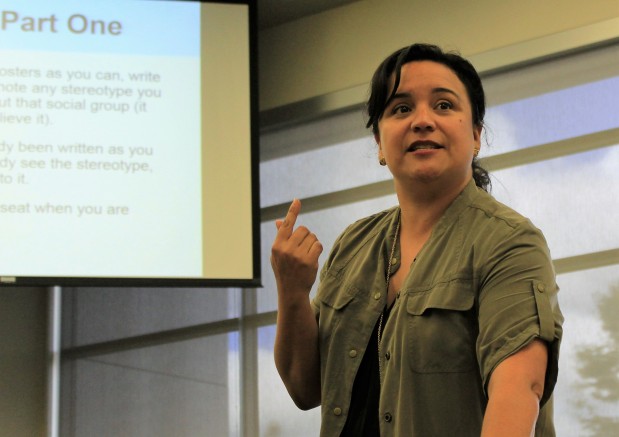 Update, April 21, 2016 2:46 p.m. : An earlier version of this story incorrectly featured an image from the April 19 brave space taken by Mack Ervin III. The correct image was taken by Nicole Kesler.

The Student Diversity Center held a workshop on stereotypes on April 14 to help American River College’s staff and students unravel their preconceived notions.

Alina Cervantes, an Early Childhood Education professor who hosted the workshop, made sure to explain the significance of stereotypes beforehand.

“Oh, you’re a low income student? I already know what you’re like,” said Cervantes, to give one example of a stereotype.

Stereotypes come from everywhere, from a person’s upbringing to even the way their college textbooks are written, according to the workshop.

Cervantes went on to explain that even seemingly innocent stereotypes, like Asians being good at math, can lead to negative consequences like a child not receiving help in a class they’re struggling with.

The workshop’s activity was split up into two parts where groups of people like Italians, Christians and gay individuals were at their own tables.

Attendees stuck notes to the group labels that they’d written stereotypes on and afterwards discussed them.

“The only way to break through stereotypes is to meet them,” Cervantes noted. “You might be made uncomfortable by something someone else wrote ‒ that’s the point.”

ARC students Nathan Melin and Lilit Ayvazyan, who were seated in front of the “hip hop music” and “Christians” groups, were surprised by what they read.

During the second part of the activity, volunteers collected a single sticky note from each group that they identified with and stood at the front of the room to read them off.

“Because I am white, I have an ego and am power hungry. … Because I am a community college student, I am not smart enough to go to a real university. … Because I have three tattoos, I must have spent time in prison,” said Theresa Young, one of the volunteers.

Once everyone had spoken, Cervantes brought the workshop to a close.

“Often, stereotypes hurt you ‒ sometimes physically, mostly mentally,” she said. “How are humans going to be safe? That’s what this is about.”

Be the first to comment on "Workshop attendees break open stereotypes"