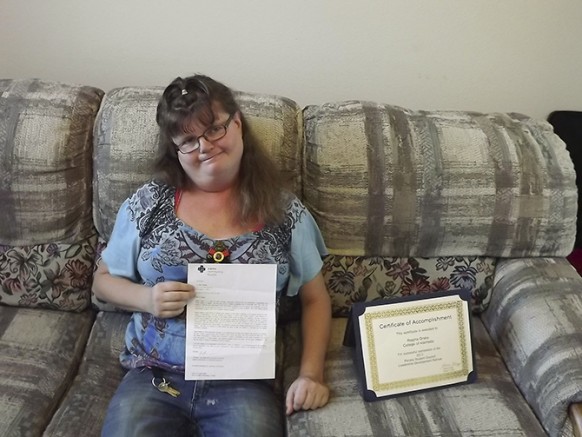 Regina Drake, a transgender ARC student, holds up a letter from her doctor recommending her for sex reassignment surgery. (Photo by Jordan Schauberger)

At the Trinity Cathedral in Sacramento during a candlelight vigil, Regina Drake, a transgender American River College student, read the obituary of a 25-year old transgender woman from Brazil who was killed earlier this year by blunt force trauma to the head.

“It’s always sad (to hear about deaths in the transgender community), but I am still here. We must never give up and always fight for a better tomorrow,” Drake said after the vigil. “The goal is that one day we don’t have to have these anymore.”

Drake, after ten years of hormone replacement therapy and battles with homelessness and drug abuse, plans to have surgery to complete her transition from male to female next summer.

Drake was born in Bartow, Florida and raised in upstate New York outside of Syracuse, so she was always surrounded by a “small town” mentality and never felt like she could express who she was.

“I always felt different; I didn’t feel like I fit in (and) I didn’t feel like a normal boy,” said Drake on her early years of puberty. “I started to cut sweats up and make skirts in private … it’s one of the things I did to feel sexy.”

Rita Sarasy, Drake’s mother, said that her daughter was never accepted by the adults and children around her.

“Not a lot of people understood her and they refused to accept that she was different, but she always forged her own journey,” Sarasy said. “When she first told me (that she was transgender), I was really shocked and worried, but the more I prayed the more I knew that, as long as she was happy, I was happy.”

It wasn’t until she was 26 and had a run-in with the law in Florida that Drake was able to start her transition.

Drake was arrested on counts of destruction of property and evading arrest. Once released, she felt that she had nowhere to turn to in Florida and New York, so she headed to the West Coast.

Drake said that it was in Washington state where she first felt support and started publicly cross-dressing, however, she still lacked the complete acceptance that she was searching for.

Her search led her to San Francisco where she started experimenting with drugs such as meth and crack cocaine.

“I had this idea in my head that maybe (drugs) is what it means to be a woman,” Drake said. “I know better now, all that stuff actually blocks the hormones.” (story continues below) 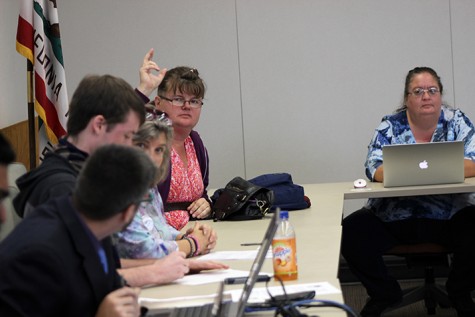 Regina Drake raises her hand during an Associated Student Body Senate meeting. Drake was a member of the ASB Student Senate earlier this semester. (Photo by Joseph Daniels)

Due to her drug abuse, Drake found herself homeless and living in different shelters in the Bay Area.

“Sometimes it’s difficult to live in the shelters because I’m in pre-op,” Drake said. “San Francisco can be a little more accepting than some of the other cities, so I ended up there a lot but that’s where my drug problem came from.”

Although it was often extremely difficult to be homeless, Drake said she met many supportive people.

Drake described Christopher Stanely, who lived with Drake at a shelter in Berkeley, as one of her “closer friends.”

“We became friends while sharing group meals,” Stanely said. “At the time, the other women housed in the women’s section (of the shelter) we not pleased with Regina’s presence, most likely due to her preoperative status as a (male to female) transgender person.”

Reflecting on her transition, Drake noted that becoming a woman physically has drastically changed her approach to and view of the world.

“I’ve had to learn to avoid certain streets or to look over my shoulder because I have been raped,” Drake said. “As a male, you can always feel safer walking down the street than I or any woman can.”

Drake added that she can “look good and feel good, but it doesn’t mean crap” unless she’s safe.

“Guys are much stronger than girls,” Drake stressed. “When you’re on the hormone pills, you lose a lot of the strength that you took for granted.”

Drake said that she is confident with her transition, in spite of criticisms.

Drake said that she’s learned to just “grin and bear it” when dealing with people who don’t agree.

“I know I’m not always going to be around people who are ignorant,” Drake said. “I always keep pushing forward because I know there’s a better tomorrow and, one day, I’ll be able to be myself.”

Drake said that, before she came to Sacramento, she spent time at the Walden House in San Francisco.

The Walden House is a center the specializes in care for people who are either HIV positive, have co-occurring disorders of mental health and substance use, are homeless or are without a medical home.

In Sacramento, she was able to find an apartment downtown through subsidized housing and a comfortable place to continue her education, something she describes as “something very special” to her.

At ARC, Drake said that she found a community that never judged her and made her transition “a little bit easier”.

Attempting to give back to the ARC community, Drake spent almost two months as member of the ASB Student Senate.

However, Drake resigned from her position as a senator after medical issues stemming from gallbladder and kidney surgery earlier this year forced her to drop one of her classes which, therefore, put her under the unit requirement for ASB board members.

Drake, who is planning on returning to Senate next semester, said that even in her little time on the board, she learned a lot.

“I know it doesn’t matter who you are, you can make a difference,” she said. “All you must have is the determination.”

Juan Miguel Blanco, who is the ASB adviser at ARC and worked with Drake while she was on the Senate, described her as being “inquisitive” and “eager to learn.”

“Regina came into (the Center for Leadership and Development) asking a lot of questions about how to get involved,” Blanco said. “She was very determined about wanting to be involved with (Student Senate).”

ARC wasn’t the first time that Drake had been involved with student government as she was also a part of Student Senate while attending the College of Alameda in 2013.

Alaysia LaChelle, senate president at Alameda while Drake was on the board, said that Drake had a pure heart and opened her eyes to “a new world.”

“I have seen Regina go through much struggle (and) she faced so much adversity and hatred on campus,” LaChelle said. “Yet to my surprise she has still always found something to smile about (and) that is what I love about her.”

Education is very important to Drake in spite of suffering from extremely low processing speed, a condition described by psychotherapist Luanna Rodgers as a developmental disability.

“Regina has a long history of learning disabilities and has limited cognitive resources to resolve problems and conflicts in her life,” said Rodgers, who evaluated Drake while at the Castro Mission Health Center. “Through her downfalls, however, she still has a desire to learn and better herself.”

Drake said that once she has her operation she wants to move back east to be with her family again. She admits that she is a little nervous and afraid.

“When I get back, it’ll be … how does the new me fit into (my family’s) life now,” Drake said. “I’m nervous but excited and it’s something I think about everyday.”

Drake said she was fine with being away from home for so long, because she feels she had to find herself before she could have a loving relationship with her family.

“I didn’t want my family to be affected or bothered until I knew this was me,” Drake admitted. “At the end of the day, you only have yourself; you’re born with yourself, you wake up with yourself and you die with yourself, so how can you have a life with others when you don’t know yourself is yet?”

Once home, she hopes to finish school and start a career as a social worker.

“I want to help all different kinds of people from all different backgrounds accept themselves,” Drake said. “Maybe, by the encounters I’ve had with people, the next trans person who goes through these places that I’ve went through will have it easier.”

Nearing the end of her transition, Drake admitted that she will never be fully accepted by everyone, but it doesn’t matter because she has faith in herself.

Program at ARC brings new faculty into a “wolf pack”