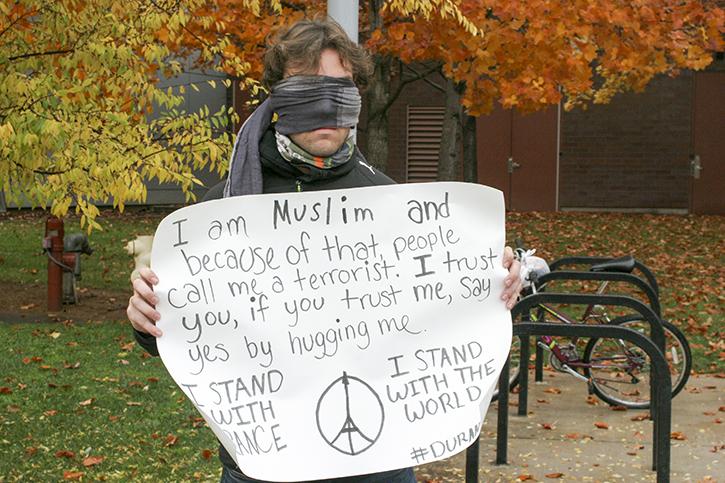 By Mychael Jones and John Ferrannini

An American River College student held a silent protest outside the Student Center on Nov. 24 in response to an anti-Muslim protest that took place one week earlier in the same location.

Burak Kocal, the student who was protesting, said that the anti-Muslim activists who erected a sign that read “Why Islam Kills” frightened him.

Kocal stood outside with a blindfold wrapped around his head while holding up a sign that asked passers-by to hug him if they agreed that Muslims should be treated with respect.

On Nov. 17, activists erected a sign that read “Why Islam Kills,” provoking an intense religious debate with students.

Coming on the heels of the Islamic State’s attack in Paris that left 129 people dead and hundreds injured on Nov. 13, the activists — who identified themselves as Christians but refused to identify with any organized group — said that they wanted to “engage people.”

“There is a fine line between hate speech and free speech,” said Blanco.

Jordan Schauberger and Kameron Schmid contributed to this report.