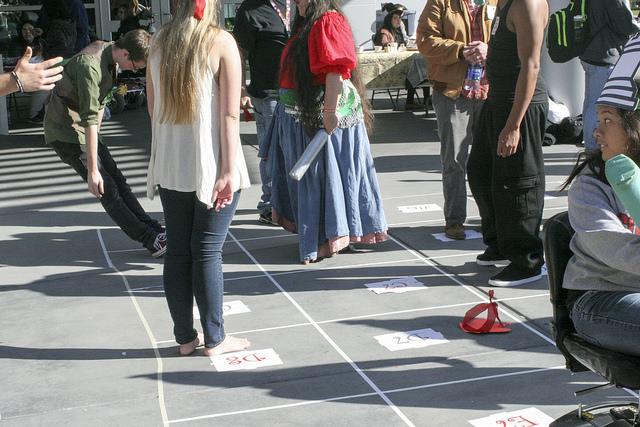 Clubs and Events Board President Justin Nicholson, left is seen falling down after his team the red team was defeated by the white team during a live chess game on Club Day. The game consisted of live human chess pieces played out on a created chess board outside the student center. (Photo by Mychael Jones)

A Under Wonderland-themed Club Day event showcased a live game of human chess, in which various clubs played the roles of chess pieces on Thursday outside the Student Center.

The Associated Student Body Clubs and Events Board (CAEB) decided upon the theme for Club Day, which was inspired by “Alice in Wonderland.”

CAEB President Justin Nicholson said that he wanted “something fun and colorful and bright” when describing the purpose of giving the event an “Alice in Wonderland” theme.

“It’s also a chance for the clubs to get together,” said Scott.

A red team and a white team competed on a made up chess board. Nicholson was dressed as a red king for the chess game.

Jaimie Braaten, president of the Fashion Club, also had a tea party set up for students.

“We decided to do a creative display,” said Braaten about the tea party gimmick.

The clubs involved with the event included the Fashion Club, Badminton, Fierce, and SOAR (Students of American River with disabilities).

Emerson Huff, a member of SOAR shared insight on the program.

“We try to come together and network to find resources for students with disabilities,” said Huff.

Braaten commented on the event and what she had enjoyed.

“It was fun,” said Braaten. “CAEB knows how to put on events everybody can enjoy. They’re very creative.”