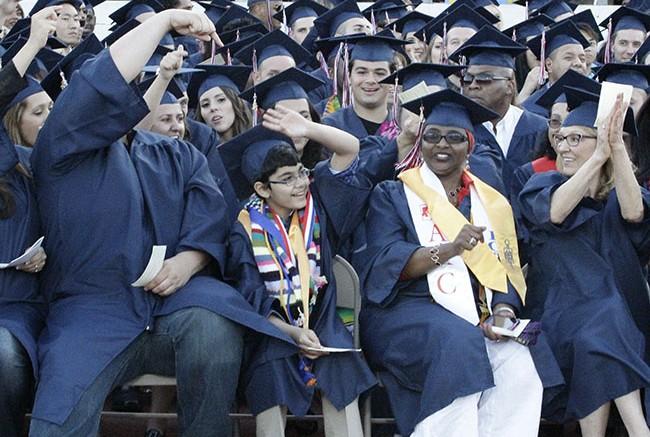 For Tanishq and Tiara Abraham, being an 11-year-old boy and a 9-year-old girl includes typical sibling rivalries, such as who gets to play as which character in Mario Kart for the Nintendo Wii.

But the two also rival each other in the academic field, as Tiara recently broke Tanishq’s record as the youngest ever member of Phi Theta Kappa, a national academic institution.

They both joined at the age of nine, but Tiara was a few months younger, admits Tanishq.

Both Tanishq and Tiara joined Mensa, a society for people with high IQs, when they were just four years old, and began taking college classes when they were seven. Tanishq is now a full-time student taking four classes a semester, but Tiara is still part-time while she finishes her advanced classes to get a high school degree.

Taji Abraham, mother to the two, is unsure why Tanishq gets the most attention, other than just the benefit of being first and oldest.

But Tanishq has undoubtedly garnered attention, from appearing on multiple TV shows, whether they were with Conan O’Brien, Queen Latifah or a reality show competition on The Learning Channel, aptly named “Child Genius.”

If Tiara has it her way, Tanishq won’t be the only well-known Abrahama child soon. She loves opera, and wants to be the next famous opera singer.

She sings in Italian and German so far, and correspondingly takes mainly language courses at ARC. She has already completed three Spanish classes and moved on to Italian, with French next up after that.

And Tanishq is still around finishing other classes he needs before transferring. His goal is Stanford, but he is also looking into several UC’s.

Again, these are pre-teens.

For Taji and Bijou Abraham, their parents, managing their children’s advanced schedules is a full-time job.

“Both of the kids said they wanted something different, and wanted to take college courses,” said Taji. “It’s a long, tedious process, and it’s challenging. Most professors don’t want to have kids as young as seven in their classes.”

In fact, every semester the family must acquire special permission for each class they intend to take, although the process has gotten easier over time.

Tanishq in particular has gotten used to a routine at ARC. Last semester, he was at school almost twelve hours a day, five days a week. In the mornings, he was accompanied by his sister and mother, and in the evenings by his father.

But he’s not content to rest on just being a bioengineering major. His loftiest goal is to be president of the United States, and address problems like global warming, education and health care. He only has to wait 24 years to run.

“I tell him these are the issues now, but by the time he can run, we may have a whole new set of problems,” said Taji.