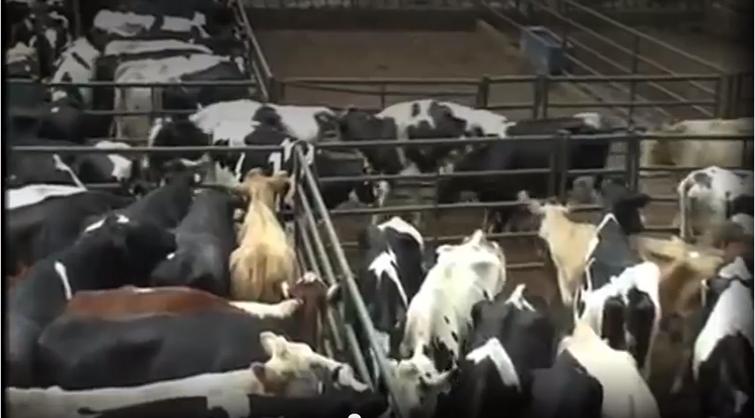 An animal rights group on campus received positive responses from a video that highlighted animal abuse on farms by challenging students into adopting a vegan lifestyle Tuesday.

Two volunteers for FARM advocated for the public education of animal abuse through grassroots activism.

Students that watched the video were given $1 and wrote their first and last names on the video touch screen with their email address for follow up purposes.

At the end of the video students were asked whether they would cease eating meat or animal-based products for a week or a month.

The FARM presentation was set up on the American River College campus from 9 a.m. to 3 p.m.

Erica O’Neal, the co-operator of FARM, started to volunteer earlier this year.

According to O’Neal the video was a “Pay-per-view outreach,” where the purpose of broadcasting the actions performed on farm animals is a “platform to educate.”

O’Neal had advised her family and friends to try out a vegan diet, however, she is not the only one that seemed to be swayed by the video’s message.

“It was very nasty and horrible what we do to animals,” said Bragg. “I’m going to recommend to friends right now.”

Another student, Keith Williams, commented on the difficulties of switching to a vegan lifestyle.

“I grew up eating meat, but it’s a bit upsetting and a little sad cutting chicken heads and I was surprised by cutting pig testicals,” said Willaims.

Todd Lee has been working for FARM for two years.

“We’re trying to educate people on legal and standard practices of modern farming,” said Lee. “It’s a re-affirmation for them (students) and this is indicative to every farm.”

Lee commented that possibly there could be an Animal Rights Club, but no further comments could be added to this statement.

Lee and O’Neal are not ARC students but have stated that the program has been on campus in the past year.

FARM has showed the video to several campuses across the nation dating back to May 2012.
“It’s been a year since we were here (at ARC) and the responses have been overwhelmingly positive,” said Lee. “Students are receptive.”

Why students should get more involved in clubs on campus