Veterans gather for the Valor Games 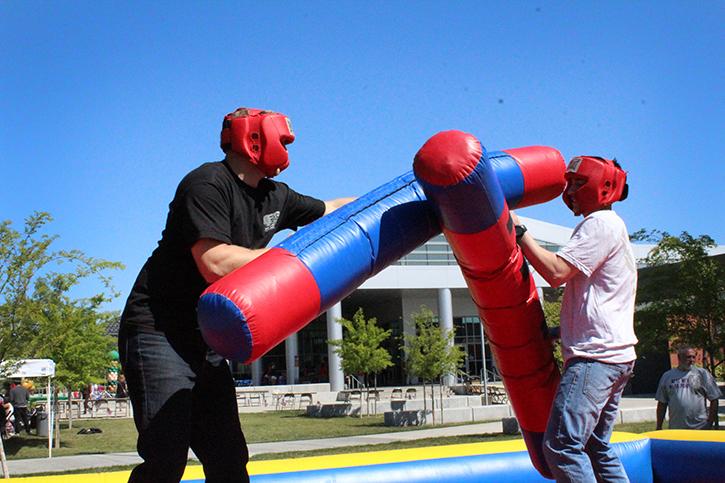 On Friday, American River College hosted its first Valor Games. A day of fun and food meant to facilitate advocacy for the veterans on campus, the theme was “are you tougher than a veteran?”

The day’s events included a “jousting” event where two students would stand on a platform and hit one another with a padded stick to knock the opponent off of their platform.

Another station at the event was an inflatable obstacle course where students could race one another and the student with the fastest time would win a gift card.

The main focus of the event, however, was advocacy for veterans attending ARC, which has one of the largest populations of veterans on a community college campus.

Booths were also set up with information to help veterans on campus become involved with the Veterans Club or get benefits on campus for being a veteran.

One of the booths was handing out a booklet titled Health Care Benefits Overview, which outlined the benefits of healthcare that veterans are entitled to for their service.

One of the days more exciting events was an MRE, Meal Ready to Eat, eating contest.

According to Chris Rogers, a mathematics tutor at the VRC and former combat medic in the army, MREs contain anywhere between 2500-3500 calories in them.

The rules of the contest were simple: entrants must eat two MREs cold before anybody else. Both civilians and veterans entered the contest.

One of the main speakers at the event was Joe Stanton, a regional senator with the Student Senate for California Community Colleges who discussed assembly bill 13.

“It (assembly bill 13) has to do with non resident tuition” said Stanton. “If you aren’t a resident of the state of California you have to pay more for college. What this bill would do is make it so that veterans who are benefiting from the GI education benefits become exempt from paying nonresident tuition.”