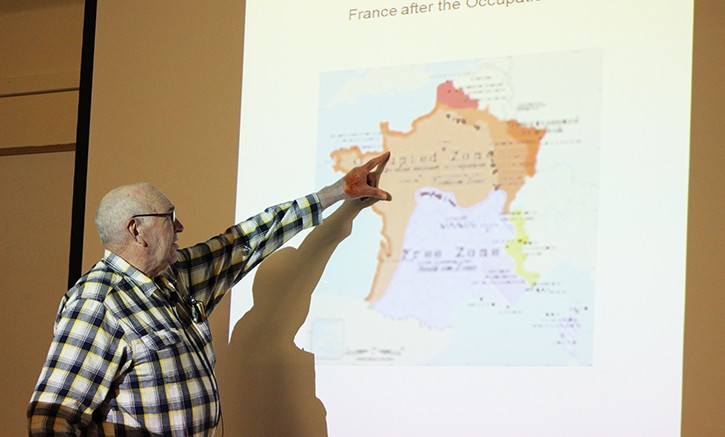 Conrad Tracy, husband of Holocaust survivor Renee Heck, shows the audience the approximate location of where Heck and her mother escaped to in France when they left their home in Germany. Tracy shared the story of his wife, who had passed last spring, during an event that remembered survivors of the Holocaust.

In honor of Yom Ha’Shoah, or Holocaust remembrance day, the husband of Holocaust survivor Renee Heck came and retold his wife’s story to students at American River College in Raef Hall room 160.

Heck past away last year and in the previous years spoke at ARC about her experience in the Auschwitz concentration camp in Poland.

This year her husband, Conrad Tracy, decided to fill her place to keep her story alive.

Humanities professor Keith Atwater introduced Tracy and read a passage from “The Six Days of Destruction,” a religious text used by both Jewish and interfaith services for Yom Ha’Shoah, written by author and Nobel Peace Prize Winner Elie Wiesel.

Heck was born in eastern Germany in 1926.

Heck’s father moved to Central America when she was a young child and four years later her parents divorced leaving mother and daughter to provide for themselves.

When Hitler came into power, Heck and her mother moved to Paris. A few years after being enrolled in the educational system, Heck was told by her superintendent she could no longer attend the school because she was German.

After being kicked out of school, Heck was educated by private tutors which her mother paid for with the profit she made from her job as a seamstress.

By the time she reached high school, Heck was back living in Germany and her mother was living in her own house in Nice, France.

When she was 16-years-old, a young man came to Heck’s door telling her he had received a note from her mother and that she was to come with him promising her she’d be gone for only a few days.

Unbeknownst to Heck, she was on her way to Drancy an internment camp outside Paris.

The young man was a Jewish bounty hunter and had found out Heck’s whereabouts from her mothers paperwork that had her address.

Heck’s mother had been at the camp for three weeks by the time she arrived.

Daughter and mother were at Drancy for about four weeks until a cattle car arrived to take them to central Europe.

During their time at Drancy Heck and her mother became good friends with the cook and before they left he gave them a handsaw and pry bar for escape tools.

The cattle cars held up to sixty people, traveled about 10 miles per hour and took roughly three to six days to reach their destinations.

“There wasn’t any food served during Renee’s time in the cattle car and there was a bucket in the corner with a blanket for a bit of privacy,” said Tracy.

Added Tracy: “The night that Heck announced to her car that she was going to use the handsaw and pry bar to escape a person in the back yelled “if you do I am going to scream.”

The man who yelled was wounded from being shot in the leg from previously trying to escape and would have been left behind if Heck’s escape plan had been executed.

Before they reached Auschwitz, “Renee and her mother said they’d identify as sisters after they heard parents and children were separated,” said Tracy.

When they reached the labor camp, everyone was lined up and and had to march to where the Schutzstaffel, or SS, men were and were filed off into different groups. Fortunately, Heck and her mother were both sent to the right side.

17-year-old Heck and her mother proceeded to undress for the SS men and then were sent to SS women who cut off all of their hair.

After their haircuts they were sent off to the showers.

Tracy recounts his wife’s words about her first showering experience.

“I had no idea if the water was warm, hot, or cold. I was too nervous to remember the sensation,” she said to him.

Added Tracy: “The people who were sent to left did not get water. They got gas.”

Tracy says that his wife was assigned to load the bodies of those who had died from poison gas onto carts, a detail she never shared with her audiences.

The bodies that were loaded onto the carts were sent to the crematories, which were constantly active.

“Each barrack held 150 to 160 people, each person was given a blanket and there were two people per bunk on each level,” said Tracy, “I asked Renee what was life like in the concentration camps. She said it ran from total boredom to periods of stark terror.”

At night, the fences were electrified and in the morning if there were three to four bodies in a building that held the people who passed in the night then there would be no selection the next day.

“One morning Renee was sent to go get the bread and coffee for breakfast and when she came back they were having a selection. The man was none other than Dr. (Josef) Mengele and the next person to be inspected was her mother,” said Tracy “Renee said it was the most terrible experience during her whole time at Auschwitz.”

Added Tracy: “Dr. Mengele took a pair of twins, cut them in open, and sewed them back together to make siamese twins. Renee said to look at him you knew he was evil. He had black deep set eyes.”

Heck’s mother passed Mengele’s inspection and shortly thereafter, in 1945, they were selected to go on a special work assignment assembling mortar shells for the German Army.

Heck and her mother were liberated by Soviet troops in May 1945.

“They knew they were free when they woke up in the morning to no guards and no locks,” said Tracy.

They eventually found their way to the United States.

“She was a tremendous woman. Very artistic, we raised sheep together and lived a very happy life,” said Tracy. “You know what I always tell people: my wife lived in France, Germany, Guatemala and the United States, so I didn’t know if I was going to get German food, American food, French food or Guatemalan food,” said Tracy.