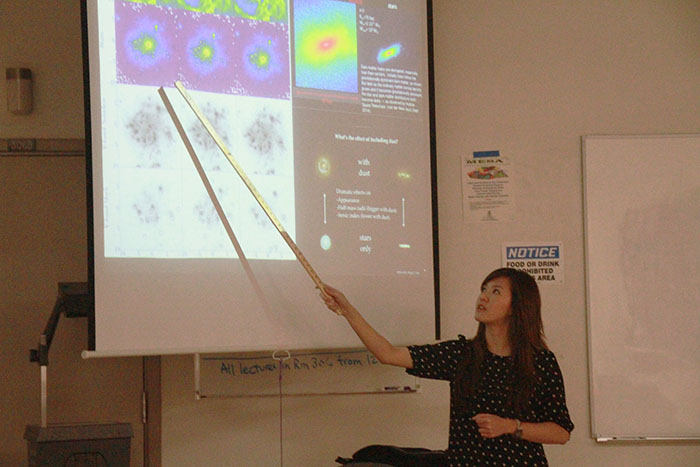 CANDELS takes up 10 percent of Hubble’s imaging, the largest project ever undertaken in its history.

Tang also explained redshift, a phenomenon supported by an equation from the Doppler effect, which is used to determine the speed of the object being studied. There are several different types of redshifts, all of which are used to measure different bodies in the universe.

“In cosmology what we are interested in is to study the universe as a whole,” said Tang. “It’s a very large scale, so what we want to do is to use the cosmological redshift.”

She went on to stress how important it is for students studying astrophysics to also take classes in computer programming. Programming is a major factor in studying information gathered from surveys like CANDELS.

“We have a supercomputer on campus at USCS because our school is a research focused college,” said Tang. “It’s a lot of programming. Take the time to learn it.”

Supercomputers program the script that generates simulated galaxies for research, so understanding programming is fairly critical in the process of studying astrophysics.

Physics major Christine Liang was curious about the programming aspect of Tang’s studies of simulated galaxies.

“I have never taken a programming class in my life, and I know computers pretty well,” Liang  said. “I guess I should try it now.”

Students and faculty attended the hour long lecture, and Tang answered several questions after she spoke.

Tang’s research also provided that the view of galaxies face-on created a high amount of radiated feedback, which allows for more in depth analyzation of these galaxies.

She pointed out that studying high resolution, three-dimensional images of simulated galaxies face-on, is beneficial to study over just viewing observational data from CANDELS. Tang compares the lower resolution observational data to the simulated data to draw more conclusions about the size, density and age of different matter of galaxies in the universe.

Tang noted how powerful it is to study simulated galaxies, and she uses the program Galfit to program, analyze and create luminosity distribution of stars within galaxies.

She inputs different parameters into the program, and then gets a model of the galaxy to study.

“The physicists are working hard to create the best simulations to study,” said Tang. “Learning programming is a very valuable skill for astrophysics, but as you can see, you don’t have to just study galaxies, you can study quantum mechanics, or you can simulate stars, or planets too, or even engineering.”