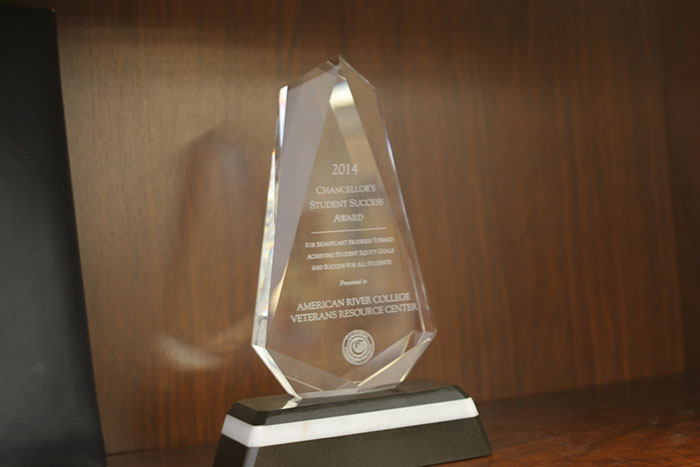 The award was given for “fostering student success and equity,” according to a press release sent out by the Chancellor’s office.

According to the press release, the award is handed out annually and “honors programs that demonstrate a commitment and significant progress toward achieving success and equity goals for students from diverse backgrounds.”

Benjamin Baird, the supervisor of enrollment services, which is a part of veteran services, says the success that led to the award lies in the convenience of their services.

“We have a one stop shop model, students can do everything from apply to the college, apply for VA benefits, they can see a counselor, they can enroll in their classes, and they certify their enrollment to the VA for their benefits,” he said.

Even though Baird believes Veteran’s Resource center has done many good things for veterans at ARC, he believes there is still much more to do.

“I think there’s an opportunity to get the word out and get more students involved,” he said, adding that they need to ask students what they can do for them.

Chris Rogers, a ARC student who is also a military veteran, says these work study students have helped him in his dealings with the Veteran’s Resource Center.

Kolleen Ostgaard, the Dean of Student Support Services, says she believes that another reason for the center’s success in helping students has been their move to one central location, which she believes has helped serve students better.

“In a very short period of time, we’ve expanded our services exponentially and the award is a testament to the work we’ve been doing,” she said.

The Veteran’s Resource center held a celebration to honor the award on Nov. 25.

Walker added that working with the Veteran’s Resources Center is one of the greatest things she’s ever done.