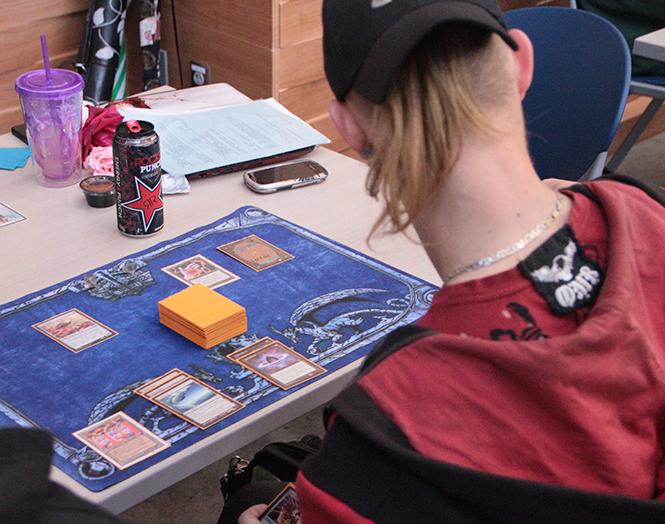 To kill time before classes, many students at American River College play games with their friends or by themselves.

One group of students pass their time with Magic: The Gathering, playing the trading card game every day in the student center.

Some of these participants are veteran players who can be seen with binders and boxes full of cards, while others are relatively new to the game.

“Honestly I’m really good at it. I only started (playing) about two months ago. I got into it pretty quick,” said ARC student Steven Cornell.

Magic offers a wide variety of cards, with types like creature cards, spell cards, artifact cards and land cards. Each card is one of 5 different colors that represent the five different elements.

Red is fire, blue is water, white is light, black is darkness, and green is earth.

Each player builds their own unique deck created from a combination of these elements. Some decks are comprised of just one element, while others mix and match the colors that would suit them.

Others, however, use a less developed strategy when they play the game.

“My favorite deck to run? Depends on the day. Sometimes I like playing blue ninjas, which was one of the Kamigawa boosters, but then I also kind of like running green, which is usually kind of known for beefing up creatures and smacking really hard,” said music major Casey Reynolds.

“I know that some people like to play ‘burn’ decks,” said Reynolds.

“Burn” decks refer to directly damaging an opponent with spell cards instead of attacking with a creature.

As with each person, each deck has strengths and each has weaknesses, with some decks being harder to go against than others.

“The one (deck) I despise the most would probably have to be a well made sliver deck,” “A sliver deck is a sliver creature. (They) are usually not that powerful by themselves, but they have effects that they can spread among their all their fellow slivers,” said Cornell.

“If you’re not running a burn deck, sliver decks are a pain.”

In order to bring creatures to the field, players must place energy or “mana” cards on the field first. When the creature is summoned it has “summoning sickness” unless otherwise stated, which prevents it from attacking the opponent right away.

Players may also have a spell card that creates beneficial status for the caster.

This group of students usually play along the back wall of the student center eating area with a large crowd around having fun and hanging out with fellow Magic enthusiasts.