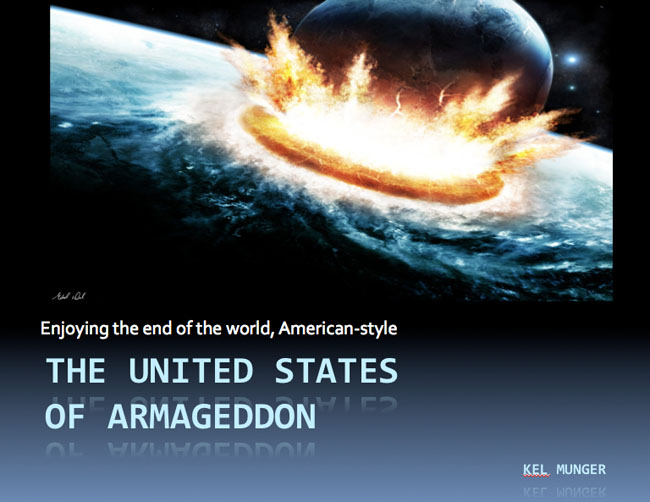 Armageddon has been a fascination of Kel Munger’s since she was a child, and on Thursday, she’s the speaker at a College Hour all about the end of the world.

Munger is an American River College professor who is currently writing a book, “The United States of Armageddon,” and has been a Sacramento area journalist for 14 years.

The book discusses America’s fascination with the apocalypse, why people are so enthralled with the idea of end of days, and how this fascination came to be.

Amanda Corcoran, co-director of the Center for Teaching and Learning, thinks armageddon is ripe for discussion among students.

“We think it’s interesting to students because of all the disaster movies, disaster literature that’s coming out now, so we think it will appeal to students. There are some people who really buy into the idea that we’re in the end times,” said Corcoran.

Munger is particularly passionate about the topic, and has been for decades.

“I have been fascinated with the idea of armageddon since I was a kid, part of that was because my family was Jehovah’s witnesses, so we grew up thinking the apocalypse was going to happen in the Fall of 1975,” said Munger.

According to Munger, people’s fascination with apocalypse stems from people’s inability to cope with death.

This inability, according to Munger, has lead to the creation of a “get out of death free card,” such as the idea of rapture among the religious community.

While the idea of armageddon is not a uniquely American idea, it is one that has been exported across the world through the United States.

Munger said the idea of armageddon being the end of days is one that hasn’t always existed, and that armageddon was seen as the beginning of a new era, rather than the end of one earlier in history.

Armageddon is attached to other parts of history, such as Christopher Columbus’s hunt for the Garden of Eden, and a cultural belief in the U.S. that individuals must be prepared to meet with “the perfect death” in the 19th century.

Disaster literature has risen in popularity in the U.S. since the end of World War 2, a rise that Munger attributes to the beginning of the nuclear age in the 1950’s.

“A lot of (the rise of disaster literature) has to do with the nuclear threat … the sense that the world could be blown up at any minute led us to understand ending as something that could happen at any time,” said Munger.

Munger also stated that she may be writing a second book on the topic and is attempting to get more funding for the book.