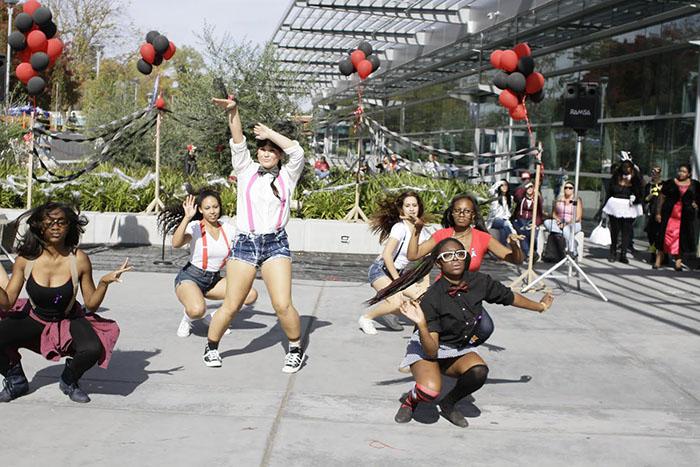 Thursday’s “Geeks and Goths” themed Club Day featured giveaways, games and a booty shaking competition, as clubs represented at the event handed out candy to students and advertised their clubs.

The event was hosted by American River College’s Clubs and Events Board, and promoted an anti-bullying message.

“I think it’s a good opportunity for clubs to put the themselves out there. I’m able to point people to join different factions they can join,” said Jorge Riley, an attendee for the event and a member of the ARC College Republicans.

16 ARC clubs and organizations had booths, including the athletic department, Model UN, the Super Smash Bros Club and the Fashion Club.

The athletic department was at the event selling old athletic equipment from former ARC athletes from all sports to raise money to buy new equipment.

ARC’s Model UN Club handed out pumpkins at the event for people to decorate as part of a fundraising event for their club.

ARC’s ASB also had a booth for the event, with Dunning, who is acting as Student Senate president, handing out candy.

For the event, many clubs decorated their booths with a Halloween theme, with some clubs handing out items like candy and even Fierce, ARC’s student LQBTQA organization, handed out  condoms.

“I think it’s a good way for the clubs to get connected to the community at ARC. If someone sees a club they’re interested in, they can learn more about it, and maybe learn about Sacramento,” said Zoey Hester, president of the French Club.

“(The event) helps because it helps carry messages. It’s about inclusion and acceptance and creating a safe, welcoming environment,” said ARC President Thomas Greene about the message the event was seeking to promote.

Club Day also had a booth devoted to painting people’s faces as ghosts, and a booth from ARC’s literary magazine, the American River Review.

The event also featured games like soda pong, and a game of hot-potato played with a pumpkin and played music over the PA system and from live performers.

Many clubs who took part in the event saw the event as a way to reach out to the ARC community at large.

“It helps (clubs) get out to more people. Not a lot of people know about clubs in general, so it’s a good platform for (the clubs),” said Ashton Nazeri, treasurer of the Super Smash Bros club at ARC.

For a photo gallery of the days events click here.