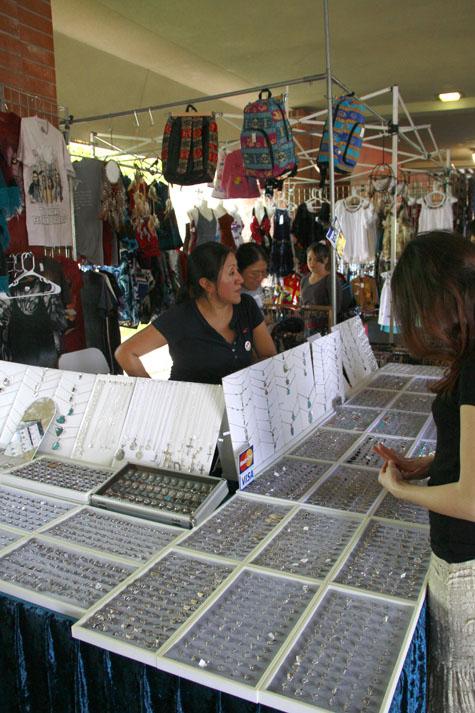 Beaver Week was recently held at American River College, turning the campus breezeways into bazaars as merchants manned their booths and peddled their goods to students on their way to class.

“(Beaver Week) fits more into my schedule, the kids spend good money and they don’t rip me off,” said Jim Candelaria, co-owner of Sierra Jewelers, and a participant in Beaver Week. “I like watching the attractive women go by. I like it when they bend over. Why do they even call it Beaver Week, anyway. Sounds kind of sexual. Besides, I haven’t seen a beaver around here, anyway.”

Beaver Week is a two-day event when businesses from around California come to campus to sell their products. The event was held April 8 to 10 from 10 a.m. to 4 p.m. in the Liberal Arts hallway adjacent to Rose Marks Pavillion.

The vendors sold various items, including handbags, bracelets, jewelry, sunglasses and hats. The event is hosted by Club and Events Board (CAEB) and was also held in December.

Many interested students stopped to admire the various items the seven vendors had for sale.

“Are you kidding me? I’m a girl and I love shopping, but this is too much. It’s awesome. I love it,” said Charlotte Gorth, a former ARC student who graduated last semester.

The money raised in the event is used by the Center for Leadership and Development to sponsor other events and programs on campus, including SAGES, which hires students to be guides and facilitators of information for students.

ARC has held Beaver Week twice a year for the past seven years. The event will be held again in December 2014.