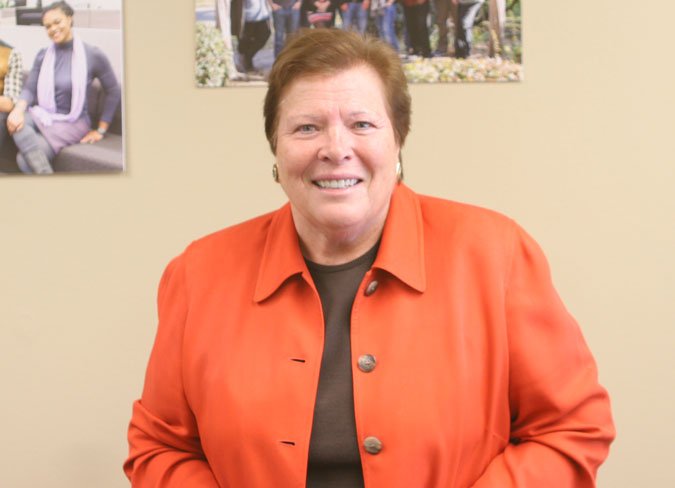 By Barbara Harvey and Jorden Hales

Walker, who grew up on ranches in rural California and Oregon, explains that she felt intimidated by the size of ARC.

“I came from a small community in Oregon, and I didn’t know how to ask ‘where do I go to get this? or what do I do?’ and it scared me so much, I got back in my car and drove back to my aunt’s house. I registered for all of my classes, and never came back. I said ‘nope, I can’t do it.’”

Eventually, Walker pursued her education at Eastern Oregon State, before returning to Sacramento for her masters degree at Sacramento State, followed by a Doctorate in Organization and Leadership from the University of San Francisco.

Walker believes that her background in ranching helped encourage her to pursue a career in education.

“I thought it was the great equalizer. I grew up on a cattle and sheep ranch in northeastern Oregon, and I just loved the environment of growing up in the country and being on a ranch, and being a part of that environment,” Walker said. “My dad was an old cowboy, and he would say often ‘you know Pam, if you want to start to learn to work with your head a little bit more than your hands, you’ll go a little farther,’ and I think that was his way to say ‘think about things you might do differently.’”

“When I got into education, it was because of athletics, but I started to see that I could do more. I got to travel around the world playing sports, I was learning things I didn’t know I was going to learn, and all of a sudden I realized that there were going to be more opportunities for me.”

Following an extensive career in high school and college athletics and administration, Walker returned to ARC as the dean of science and allied health in 2001, where she remained for ten years, later becoming the interim president in January, 2014.

In her time as a faculty member at ARC, Walker has implemented a “servant leader” mentality, which has empowered her staff and prepared them to pursue better opportunities for themselves.

“She [Walker] did her dissertation work on servant leadership,” said Interim Vice President of Student Services Robin Neal, who filled the position when Walker became interim president. “Everyone is better than they were before as a result of having been served or worked under [Walker’s] guidance. She exhibits that, she lives that, that’s who she is as a person, a leader, as a vice president, as a president.”

Walker, who is known by her peers to be a strong student advocate, places a lot of emphasis on acting as a professor of sorts to faculty as well.

“One of the most important things she taught me as a leader is to teach other people what you know,” Neal said. “Be a good mentor, be a good coach to the people who work for you, because the idea of succession planning is you want make sure that you are giving people opportunities to put themselves in a place where they’re ready to step up to become a leader.”

Walker, whose time as interim president is coming to an end, admits that she will miss the position.

“Yeah, I’m actually having fun. I like it–But I always have my other job. I’m going to go back to vice president of student services, so I still get to be on campus,” said Walker, “I hope my legacy here will say that I cared a lot about this place, that I worked really hard in support of it, and we’re going to leave good people in all the right spots to keep helping.”

Walker believes that her first experience at ARC taught her a valuable lesson about the college experience.

“When I think about it, 5,000 people, that was a lot of people. I grew up in a community where there were only 36 kids in my graduating class from high school, so 5,000 was just massive to me,” explained Walker, “It taught me a lesson about being on college campuses–I always try to help somebody.”

Walker applies that lesson to her approach with students and staff.

“Even in this position today, if I see someone who’s standing there, not quite knowing where to go, I’ll try to walk them across campus and at least get them to the right place, because it’s scary when you’re coming for the first time.”