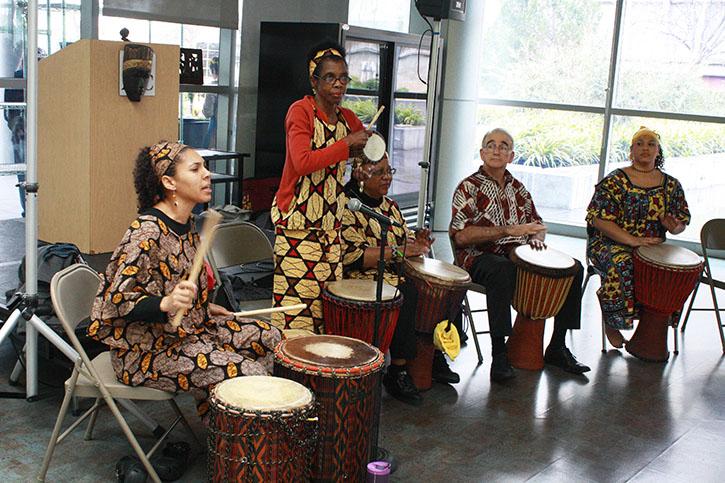 The event was organized by the Center for Leadership and Development in collaboration with Umoja Sakhoo Learning Communities.

The event featured traditional African music, attire, dancing, poems and an art exhibit from the Sojourner Museum. The celebration also served a “special meal celebrating black heritage,“ according to a media circulated by the Center for Leadership and Development.

“It’s Black History Month. The idea is to bring awareness to the black culture,” said Frankie Johnson, a Student Personnel Assistant who helped organize the event. “We just want to run the gamut of what we’re all about.”

The celebration included a “spoken words” contest, in which three poems, written by student volunteers were read. The winner of the contest was ARC student Shelby Scott, who encouraged listeners to see the speaker as beautiful without beauty products.

Another part of the celebration was when the members “went to church,” and spoke about empowering figures from the Bible, and had a cultural attire contest.

Jeremy Diefenbacher, President of CAEB (Clubs And Events Board), also performed “Crazy Girl” and “Shady Lady,” both songs he wrote himself.

The black heritage celebration also featured vendors at the event, including Wells Fargo, several gaming companies, a CXD scholarship vendor and author Tomiya Gaines advertising for her book “The Perfect $20 dollar date,” which gives advice for how to have the perfect date for only $20.

The event was delayed for most of the month, which is why it did not take place until the second-to-last day of the month.

“A lot of (the delay) was logistical, a lot of it was a way to wrap up the month, to bring it to fruition,” said Johnson”

Be the first to comment on "ARC celebrates black history month"