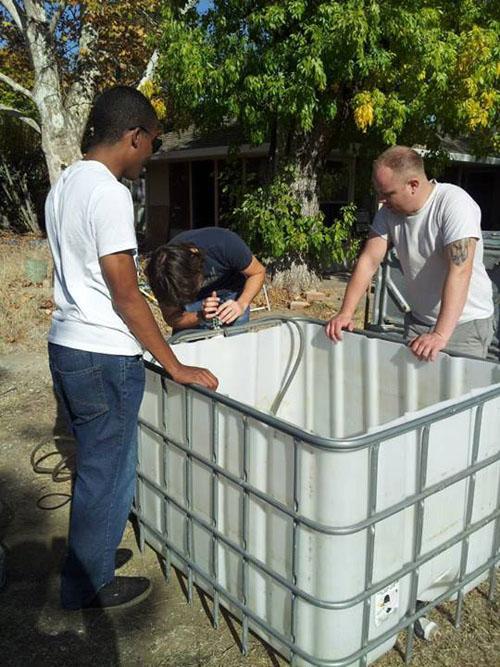 One group of students from the club are conducting an aquaponics experiment. The other, with the help of Hacker Labs in downtown Sacramento, is building a 3D printer.

Hareem Zahid, president of the club, explained how the projects were chosen.

“They just jumped out on us. Our members felt very passionate about these two projects. We wanted to get every sector involved; we wanted physics, engineering, biology, chemistry and it’s hard to get one project that has everything involved.”

“Our 3D printer focuses in on the mathematics and the engineering. And our aquaponics project is all chemistry and biology, plus a lot of physics and engineering, because we had to build the greenhouse and the water tanks,” said Zahid after a Research Club meeting on Mar. 7.

“We try to be open to people who have ideas, and if it’s logically feasible, we give it a go,” she added.

The 3D printer project, lead by club member Nile Mittow – is currently being built out of printed materials from a different 3D printer at Hacker Lab – and parts ordered from China.

The first 3D printer was built in 1984 by Chuck Hull of 3D Systems Corp., but they remained rare and costly projects largely until the 2000s, when they became more prevalent and less expensive to build.

“It was kind of a curiosity for all of us,” said Mittow. “Most of us know each other from MESA (Math, Engineering and Science Achievement). We all thought the idea was cool. I mean, it’s a hot glue gun on a three-axis robotic control, that can print up anything you design, to certain requirements and specifications.”

The aquaponic experiment, co-lead by club members Emily Lovell and Jennifer Diamond, was the first project to begin.

“Basically an aquaponics system, you have fish and you have plants. You use the waste of the fish, which is in the water, and that water gives nutrients to the plants. They grow with that, and in turn they clean the water, and return it back to the fish. It’s a cycle. You could use it for countries that don’t have a lot of food. They wouldn’t need to buy stuff, they could just use the cycle,” explained Diamond.

“We want to research what kind of fish can be most beneficial in an aquaponics system. Our control is our plants, and we’re putting two different types of fish (goldfish and catfish) in our system and seeing which system develops better plant cells,” added Lovell.

According to Lovell and Diamond, the longest part of the aquaponics project was the building of the greenhouse and water tanks to keep the fish in.

The club also has an official website, arcresearchclub.org, designed by Vice President Cherime Vail, where they announce club news, post photos of the experiments, and update club members on open officer positions.

ARC Research Club meets Fridays from 3 p.m. to 5 p.m. in room 368 of the Tech Ed department on campus.