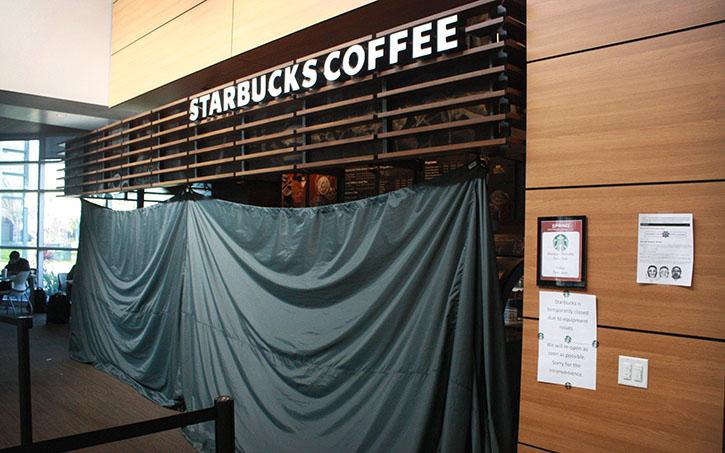 The Starbucks coffee shop on campus was closed this morning after a small electrical fire was started in one of their coffee machines.

A fire at Starbucks in the Student Center at 9 a.m. this morning has resulted in the most popular coffee shop on campus being closed until at least this afternoon.

Starbucks employee Kristen Cannon said she was there when the coffee brewer had an electrical fire.

“It was a little scary,” Cannon said as she chuckled. “That’s the main reason why we shut it down because safety is our number one priority. We want our baristas to be safe and we want our customers to be safe.”

Cannon said she doesn’t recall a similar incident ever happening before.

She said that a repairman was on the way to diagnose the problem and fix the machine.

“We have a repair guy on the way to look at it right now,” Cannon said. “We put in an order for an emergency repair.”

Starbucks is hoping to be open again by later this afternoon.

Vidal Burney, a social science major, works across from Starbucks in the Center for Leadership and Development.

Although he didn’t see the fire, he has seen the effects the Starbucks closure has had on students

“There are some people going crazy because Starbucks is closed,” Burney said. “I know Starbucks is usually packed every single break. Some class gets released and students just rush over here.”

The Current will update the story as more information becomes available.

Kyle Moore contributed to this report

Be the first to comment on "Coffee-geddon: Student Center Starbucks closed due to fire until further notice"