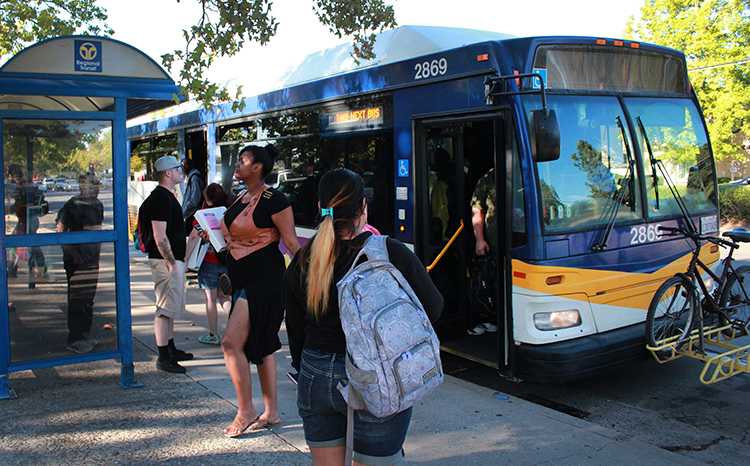 ARC students unload from a bus stopped outside the enrollment office in the morning. Acting ASB president Jorge Riley announced that a proposal for summer bus passes was in motion.

Acting American River College ASB president Jorge Riley announced in October that a proposal for summer bus passes was emerging for “consideration to go back before the district.” Summer bus passes were one of Riley’s initial promises to the student body when he ran for senate last spring.

Riley believes this service could be available to students throughout the Los Rios Community College District as soon as summer 2014. Student body presidents at all Los Rios community colleges are currently investigating the issue of public transportation to present statistics indicating a necessity for summer bus passes.

Riley is currently in the process of distributing a survey to ARC students so he may present its results to the district Nov. 13. The survey is currently available to students at “http:/jorgeriley.polldaddy.com/s/summer-bus-pass-survey” and will soon be distributed to students via Los Rios Gmail.

Though negotiations between the district and Sacramento Regional Transit (RT) have broken down in the past, Riley states that circumstances, involvement from students and concerns from RT will be major contributing factors and make the overall difference in these negotiations.

“I have students that are working for the board at RT,” Riley said. “We’re working front-to-back and back-to-front to make sure that (Los Rios and RT) both come together and also trying to investigate where the negotiations have stopped (in the past).”

Pricing has been a point of concern for both the district and RT in previous negotiations. However, recent studies by ASB and RT have revealed a dropoff in riders during summer months.

Because summer courses generally require students to attend classes four days a week, as opposed to two during spring and fall semesters, this increase in traffic may be a convincing opportunity for RT.

Riley voiced some concerns about the conflict in ASB agendas. The Nov. 13 presentation, which will take place at Sacramento City College, coincides with the second day of ASB’s special elections. Riley believes this may affect his ability to campaign, but seeks to use the conflict as an opportunity to demonstrate commitment to the student body.

“I have to choose: Am I going to work on my campaign or am I going to go represent the students?” Riley said. “I just hope people will understand that it’s better that I do my job than sit there and worry about my own personal interests.”

Women’s volleyball overcomes slump against Gavilan, advances to third round