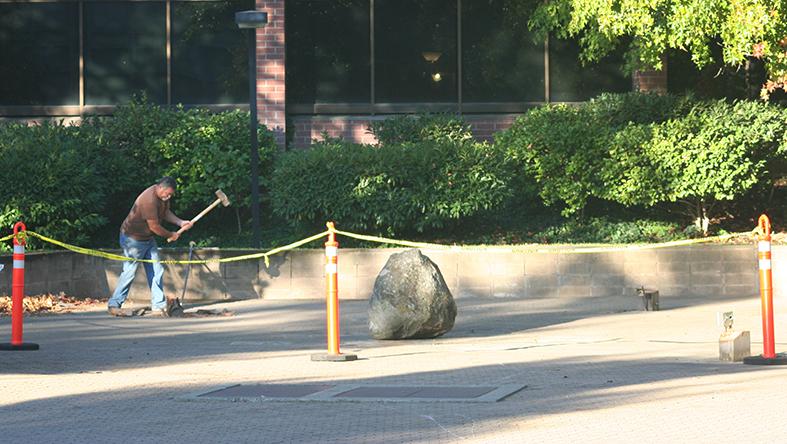 An MC White Construction worker tears down the remnants of the Rose Marks Pavilion on Oct. 21. (Photo by Jeff Gonzales)

The Rose Marks Pavilion, built and named in honor of a former American River College English teacher, was removed from the Rose Marks Quad on the ARC campus Monday.

Mark White, owner of MC White Construction – the company heading the demolition project, said that the structure had dry rot and was going to be replaced.

“We try to be proactive in terms of mitigating risk,” said Laduan Smedley, director of Administrative Services at ARC. According to Smedley and Chris Day, Captain for the American River College Police Department, there have been no reported complaints or concerns about safety.

According to an ARC Historical Buildings and Monuments document, the pavilion and quad, completed in 1980, were given to the college from Marks’ husband. Funding for the new project, however, will come from the campus coffers. “Whether or not (the pavilion) was donated, it’s up to the campus to maintain it,” said Smedley.

The new pavilion will be an exact replica of the old pavilion, complete with the original lettering. Although the scope of the project hasn’t been determined as of this writing, Smedley said there might also be some changes in the quad area to make it a more inviting gathering place for students, such as new paving stones or additional seating area.

Smedley indicated that the school is waiting to start designing to get the input of the new president, who is to be named at the beginning of the upcoming calendar year.

The restoration timeline has not yet been announced, but campus activity will be taken into consideration.

“Rose Marks is a focal point of the campus,” said Smedley, “so if you start doing work it can impact students.” While it would be ideal to perform the work on the area during the winter recess, that won’t be possible, at least not this year.

If the only work necessary will be to replace the pavilion, the plans can go ahead smoothly.  However, the upcoming president may have a different vision for the space. If additional modifications are approved, the department of Administrative Services has to follow a multi-step protocol.

Smedley chairs the Buildings, Grounds and Safety Committee, which, according to an ARC website describing standing committees, includes three student representatives, 13 faculty and three classified employees, among others. Each of these individuals may contribute ideas concerning the future of the space. The facilities department will then find a contractor to complete the job through a bidding process. From there the committee will look at how much different ideas will cost, and make a decision about how much the college wants to spend on the project overall.

Even if the project can’t be completed this winter, Smedley hopes to have the work done during the summer intersession or other academic recesses.