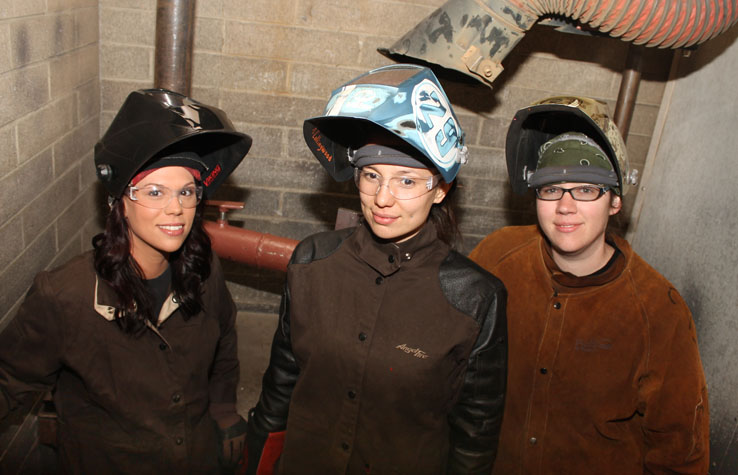 (From left to right) Melissa Scheetz, Katherine Collingwood and Sarah Spitzer pose in their welding gear in the lab on April 10, 2013. Scheetz, Collingwood and Spitzer all competed in the SkillsUSA competition in San Diego on April 4-7. (Photo by Stephanie Lee)

In any job field that is typically male dominated, women have to constantly strive to prove themselves. Welding is no different. According to the Tulsa Welding School in Tulsa, Okla., less than 6 percent of the workforce is female.

The male to female ratio of welders at American River College is pretty low. “We have approximately ten percent females in our classes,” said Welding Advisor Mark Reese, who teaches two classes in the welding department at ARC.

The saying “Anything you can do, I can do better” isn’t one that applies to the women of ARC’s welding department. And it certainly doesn’t apply to two of the welding majors currently enrolled this semester, Melissa Scheetz and Sarah Spitzer.

Males are known to be hard on their female counterparts, but if you ask anyone of their classmates or teachers, they will all say the same thing: the guys accept them for what they can do, not based on their gender. “Female welders often have more patience and attention to detail than many of the male students,” said Reese.

Jimmy Mackri, who is enrolled in Reese’s WELD 321 class, says, “I believe [women] were the backbone of our industry, but we lost it. I would like to see more women in this industry.”

What makes them stand out amongst the roughly eight women currently enrolled in one of ARC’s welding classes? What about the appeal of wearing a hood, leather gloves, and staring into fluorescent lights attracts these ladies into this line of work?

Scheetz, who’s grandparents, and now parents, own and operate Scheetz Welding Services, Inc. in Folsom, Calif. hasn’t known anything else. “I have been around welding and fabrication my whole life. Literally, my playpen was in the office,” said Scheetz.

For Spitzer, the road to welding came via a different route. “I started welding in fall of 2011. I was an art student who wanted to work more in metal.  At some point I realized that I liked welding more than art,” said Spitzer.

And welding isn’t just fusing two pieces of metal together; rather, there are Tungsten Inert Gas (TIG), Shield Metal Arc Welding (SMAW), Flux Core (FCAW), Metal Inert Gas (MIG), and many other welding styles. If you took a look around the back of the lab on campus, you would find tables, chairs, and spare metal amongst the other objects that can be used to practice on technique.

SkillsUSA California is a welding conference that, according to their website, “provides leadership training to students and instructors in the career and technical education sectors.”

“We work great as team. Katherine is a really good TIG welder, while Sarah is a good stick welder,” said Mackri. Scheetz’s fabrication team came in second, while Spitzer and Collingwood placed third.

It doesn’t matter how these ladies came into welding, what matters is how they do their job.