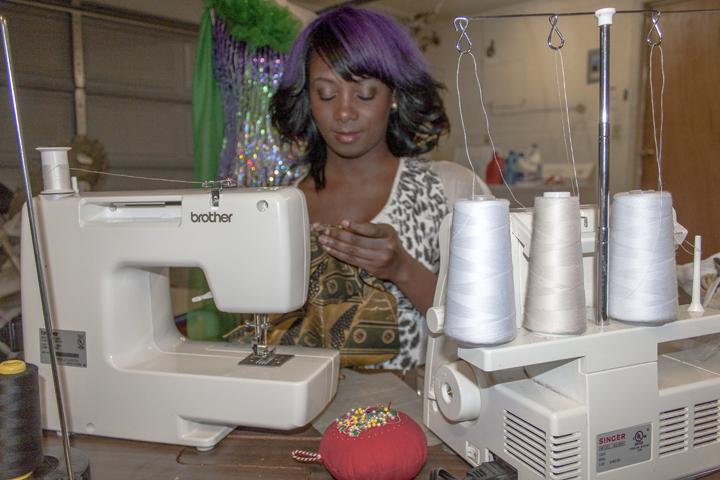 Ada Tajudeen, who makes clothing, and jewelry, working on clothing on Feb 6 in her sewing studio located at her home in Rancho Cordova, Calif. (Photo by Jenn Schopfer)

Whether it is making jewelry, dresses, or beautiful braids, 22 year old Ada Tajudeen can do it all. Born in Sierra Leone, Africa, Tajudeen has the drive to make all of her dreams come true. She’s attending American River College to obtain a business degree, and hopes to open a boutique in Sacramento. In her family, designing clotheing is a common interest. “In Sierra Leone, my dad is a fashion designer and my grandmother is a seamstress,” Tajudeen said.

Tajudeen made her first dress for a Barbie doll when she was six years old. From that moment on, she knew she wanted to be a fashion designer. On November 15, 2009, Lateefa Taiwo Sanyaolu, a contestant in the Miss Black California pageant, wore a gown that Tajudeen designed, and Sanyaolu won 2nd runner up. With that accomplishment, Tajudeen decided to start her own clothing line.

Directly after graduating from high school, she attended the International Academy of Design & Technology. She graduated in 2010 with her Associates of Arts Degree. “I always knew that my daughter could make it no matter what obstacles stood in her way,” her mother said.

“My grandmother was a wonderful woman and she basically raised me. I knew naming my line after her would have made her very happy,” stated Tajudeen. Her intention with Zynabe Beauty is to make woman feel great about themselves. The dresses have been seen in 11 fashion shows in Sacramento.

In the very first fashion show she participated in, she was an amalgam of emotions. “My stomach had butterflies and my hands couldn’t stop sweating. All I kept thinking was ‘I hope everyone likes these designs.’”

A bad habit she wishes she could change is critiquing her gowns during the shows. “A lot of times I actually think of ways I could have made a dress look better,” Tajudeen said. In either case she is proud of her first show.

Tajudeen decided to add accessories to her line after many compliments from people about earrings and bracelets that she made. “I am an earring fanatic. I love earrings. I started making my own because I wanted a unique pair. A lady, one day, offered to pay me for a pair. From that moment on, I decided to start selling them.”

As if being a fashion designer and a jeweler isn’t enough, Tajudeen also loves to model. She has modeled in 15 shows. Being able to model at a benefit for a children’s hospital has been her most memorable memory yet. “Knowing that I am taking part in an event that will benefit children lets me know that I’m making a difference.”

A hammer, a hatchet and a lifeless body