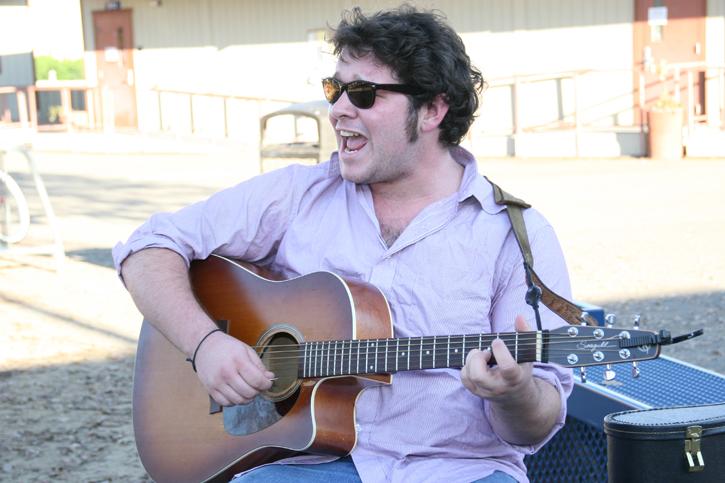 ARC student Mac Russ plays an acoustic cover of the Grateful Dead's "Truckin'" in the portables on Nov. 7. (Photo by Stephanie Lee)

Describing his music genre as “folk and rock mixed together,” Mac Russ is a musician with, as he says, “a bit of a unique sound just because I taught myself everything I know about music.”

Self-taught isn’t a disparaging thing; Russ can play and sing so well that while he was being recorded for a video in the portable area here on campus, a student on her way to class complimented him and whispered, “he is really good” to her friend.

“I enjoy playing music that gets people tapping their feet, but also may give them a shiver from time to time,” Russ says of himself on his Facebook profile. “I have very little formal instruction in music and have developed a strange style all my own. I play a seagull guitar and I love it dearly.”

Pete Seeger is Russ’s musical hero, along with his grandfather. Russ likes being a solo act, but wouldn’t mind sharing the stage with other musicians.

“I’ve been playing solo for a long time and it’s just really nice when you actually have other people there playing with you,” said Russ. “It’s like, intoxicating when you are able to play with other people from beginning to finish and everything sounds good. You just flow together and nothing was rough or uncomfortable, everyone knew what they were doing, it’s just a great time.”

When asked what song he would like to possibly release as a single one day, “Probably the song ‘Kiss The Devil’ that’s on my YouTube,” replied Russ. “That’s a really fun song. It’s really fun to play live because everyone dances and it’s just a good time.”

“I actually thought of album cover I wanted to do the other day,” said Russ. “On the corner of El Camino and Fair Oaks, they have those palm trees and they haven’t cut the straps yet so the leaves haven’t fallen down. So they are up in these weird leaf buns. And I thought it would be cool to take a picture of them with the blue sky behind them because they look so bizarre.”

Even among other musicians, he tries his best to remain humble. “Whenever I try to start a band, people always say, ‘why don’t we just go by Mac Russ?’ And that’s no fun. I like band names, and I don’t want all the attention on me. I like sharing everything.”

And Russ really does love to share. In fact, Russ is in it for anyone who will listen to himself more than he is in it for himself.

“I am really big on sharing my music with people. My music doesn’t do anything for me. I just enjoy it when other people enjoy it. That’s when I know the song is good,” said Russ.

Community Resource Fair seeks to give job opportunities to students

Be the first to comment on "Happy to play the blues"