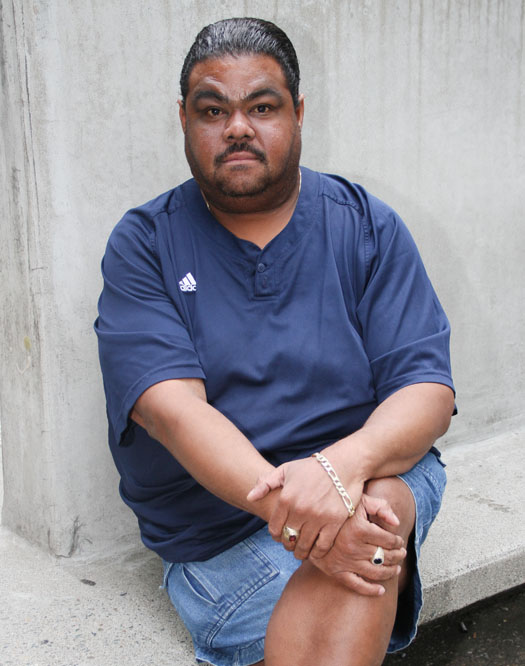 Samuel Ayala, now at 311 pounds, is leading a much happier and healthy life having lost more than 500 pounds. (Photo by Stephanie Lee)

When death pounded on his door, Samuel Ayala stood on wobbly legs mapped with varicose veins, pressed his 870-pound morbidly obese body against the door and refused to open it.

“I knew I didn’t have long,” Ayala said. “If I didn’t do something, I was not going to see my kids or grandkids.”

According to a recent report in the Huffington Post, one-in-three Americans is obese and that number is expected to rise to one-in-two by the year 2030.  Obesity is such a concern that the first lady has dedicated much of her time and effort to reducing childhood obesity.   Obesity has traditionally been defined as weighing more than 20 percent of your ideal weight.

Ayala, 43-years-old and affectionately called Big Daddy, came from two cultures that enjoy food on any or all occasions.  His mother was born in Puerto Rico and raised in New York. His African-American father, who died at the age of 42, was born and raised in Memphis, Tenn. “We just loved food,” Ayala said.  His food of choice was “anything fried.”

In addition to the family love of food, Ayala ate out of frustration: sorrow, sadness and loss.  He was taunted and insulted for being overweight.

“It was pretty ugly,” Ayala said. “The things I would hear in different languages. Horrid things. I speak Spanish as well.  I wasn’t scared, but I have a heart. (I heard things) even from people I know whose parents are obese. Thankfully, I have tough skin.”

Carrying all of that weight on a 6-foot-4-inch frame caused a variety of health issues.  Ayala suffered with diabetes, hypertension, asthma, edema, neuropathy, shortness-of-breath, fatigue, varicose veins and stress to his joints.  “A lot of obese people, their sex drive diminishes,” Ayala said.  “That is a personal question that people always want to ask. I’m thankful I’m still healthy in that way.”

He was able to purchase 9X-sized clothing at Men’s Big & Tall or Casual Male.  Ayala saved many of those large shirts and pants. “I keep them as a memory of what I’m never going back to,” Ayala said. “I’m sure Oprah will want to see them one day.”

Ayala had a wake-up call in 2000 when he visited his dying grandmother in the hospital.  A nurse took him and his uncle to be weighed. The bed scale hovered between 860 to 870 pounds. “That hit me like a ton of bricks,” Ayala said. “I knew I was big, but almost a thousand pounds! That’s scary.”

His fear was greatest at night.  “I would lay on my left side,” Ayala said. “But I knew the blood wasn’t circulating properly to my heart. I would get scared and think I was going to die in my sleep. So, I would turn over to the other side, and even then it was not very comfortable.”

Ayala decided to lose the weight the old fashioned way.  He started backing away from the table, walking, swimming and a little dancing. He walks about five to 10 miles a week. Swimming is easier on his knees and ankles.  Ayala said yo-yo dieting and binge eating will not work.

Ayala was a member of his high school swim team.  “I’m getting older, but maybe I’ll be able to sport a speedo again one day.” Ayala said.

Today, Ayala’s weight is 311 pounds. It took 10 years for him to lose 559 pounds.
His doctor feels he needs to lose another 110 pounds to meet his BMI (body mass index) suggested weight.  “I just want to live healthy,” said Ayala. “I don’t want to look like a crackhead or all twigged out. You can tell a healthy skinny from a sickly skinny.”

In the meantime, he enjoys doing little things most people take for granted, such as crossing his legs, shopping at any store and taking a walk without getting winded. Ayala is also enjoying his time at ARC.  He is majoring in criminal justice and Ayala wants to pursue a PhD in the field.

Ayala knows people will have many questions or maybe want advice.  He welcomes the opportunity to share his experience.   He encourages anyone who wants to stop and talk with him, to feel free to do so.

He advises anyone planning to lose weight that, “if you’re going do it, do it for you. That way, you don’t have any regrets later on.”

The importance of opinion

Say no to sleepwear

Be the first to comment on "Worth the Weight: ARC student recounts journey to lose more than 500 pounds"