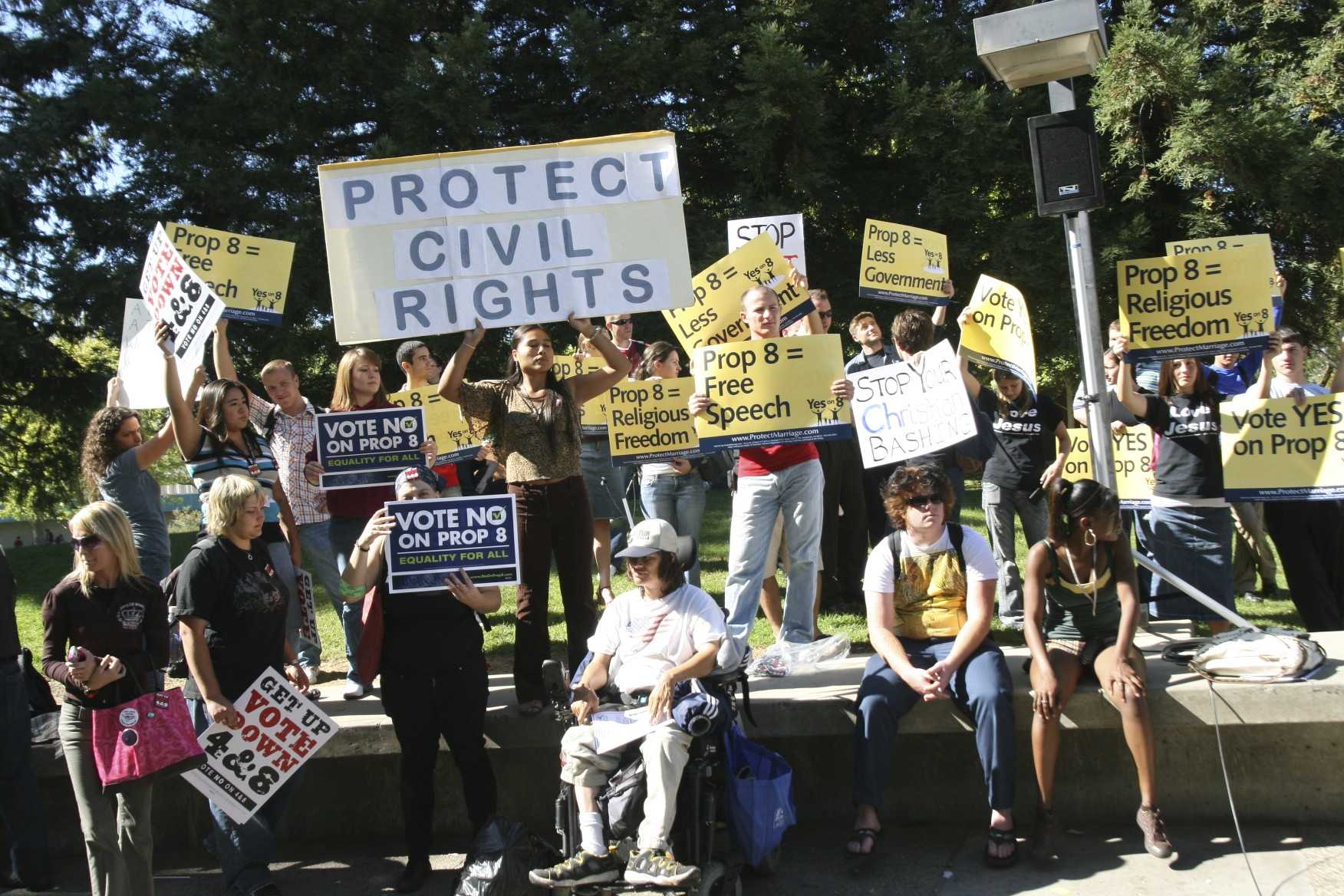 Protestors for and against Prop. 8 rally their supporters at ARC on Oct. 7, 2008. (Photo by Josh Clemens)

The California court has spoken: marriage is no longer defined as a union between one man and one woman. Proposition 8, a much debated initiative which was voted into law in 2008, violated California’s Equal Protection Clause by singling out one group of people and denying them the right to marriage; therefore the law is unconstitutional.

In October 2008, American River College became the first publicly funded school to endorse a state ballot measure; one that for many figured a state of intolerance. The Associated Student Body council voted 8-3 to endorse Prop 8. The decision brought national media coverage as students of ARC came together and refused to let eight people speak for the entire school.

Everyone is entitled to their own opinion and their right to freedom of speech under the First Amendment, but constitutionally gay marriage cannot be deemed illegal. There cannot be a law that limits one group of people (homosexual couples) from marriage, when heterosexual couples can be married.

Civil unions and domestic partnerships were used to replace the word marriage, but it only recreated an old situation of separate but equal. The same ploy was used by the government to keep segregation alive in the case of Plessy v. Ferguson, a concept that has been outlawed since the 1960s.

Judge Stephen R. Reinhardt, a deciding judge for Prop 8, wrote, “Proposition 8 serves no purpose, and has no effect, other than to lessen the status and human dignity of gay men and lesbians in California.”

Three years ago when Prop 8 became a law, it seemed that this would be the direction that everyone was moving in; making gay marriage illegal. However, in 2011 the 18-year-old law, “don’t ask, don’t tell” was repealed, allowing gays and lesbians to openly serve in the military as a homosexual. A week after Prop 8 was declared unconstitutional; Washington became the seventh state to recognize gay marriage. Also, New Jersey may be on its way to becoming the eighth.

These little steppingstones are growing larger and wider, but ultimately it comes down to repealing the Defense of Marriage Act, which maintains that no state has to recognize gay marriage, even if the couple were married in a state where it is legal. The Proposition 8 ruling may be appealed and could make it all the way to the U.S. Supreme Court.
It’s not about religion or personal beliefs; it’s about equal protection under the law. This is the civil rights movement of our generation.

Editorial: Should petitioners be allowed on campus?

Poverty rates spike and the blame is bigger than Washington

4 Comments on "Our civil rights movement"