What it means to be a furry 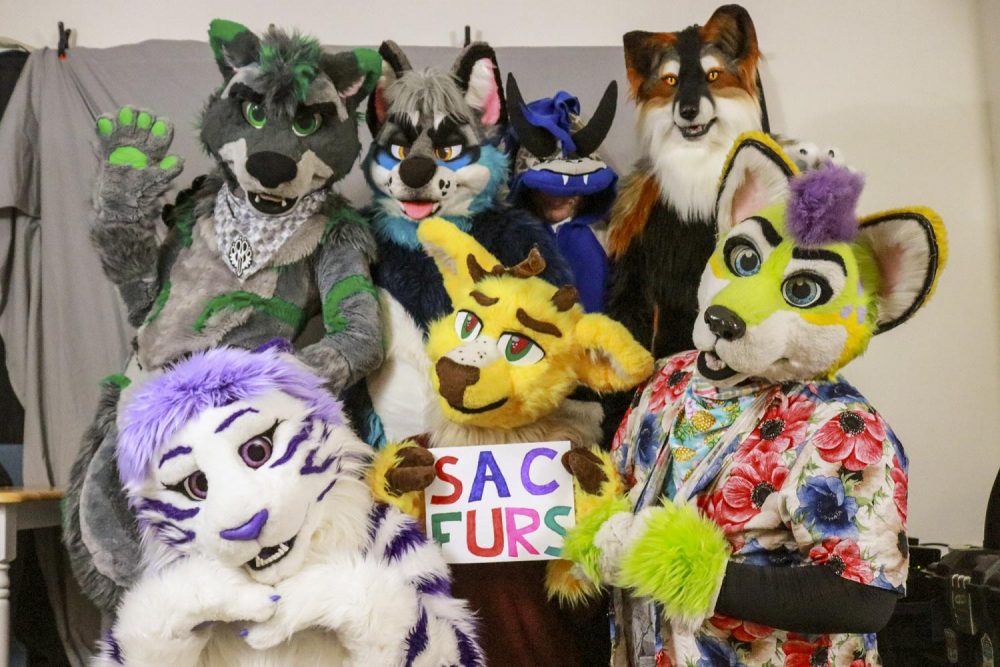 The furry fandom is a diverse group of people who enjoy expressing themselves by identifying with their "fursona," or animal persona, by either dressing up in their fursuits or attending furry social events. SacFurs is a group within Sacramento that holds regular social gathers in the community. (Photo illustration by Brandon Zamora)

Everyone has a hobby of some kind. Some people like to go fishing, maybe play or watch sports or even like to just read. Then, there are people who have the hobby of dressing up in a raccoon mascot outfit on Saturday nights, and going bowling with their friends who also dress up in animal costumes.

Being a furry is a hobby that a lot of people, myself included, really enjoy. It’s because of this hobby I was able to meet such great people that I get to call my friends, and travel to places I’ve never thought of going to ten years ago. Being a furry brings happiness into my life that I never thought I’d ever experience.

One of the biggest stereotypes people believe about furries is that they’re just interested in this hobby because of sex. It’s no secret that this fandom does have a sexual side to it and yes, some people are even into it for that reason, but we’re so diverse that you can’t say every furry is only into the fandom for sex.

The age range in the furry community can vary anywhere from 10-years-old to someone in their 70s, therefore saying that someone is furry only for sexual reasons is ridiculous.

The furry fandom was created in the late 1980’s and is a hobby that people worldwide have in common; there is even a community of them here in Sacramento. The local furry group in Sacramento, whose members call themselves “SacFurs,” organize events and meetups for other furries in the area to spend time with each other and have fun.

Recently, furries have become more mainstream in the media. YouTube channels such as Majira Strawberry’s are becoming more popular. Strawberry has over 200,000 subscribers and makes videos about the furry fandom.

However, there are still negative stereotypes about furries that a lot of people still believe and criticize the fandom for.

One of the biggest elements in this fandom are the animal costumes that some furries wear at events like conventions or local meetups. These costumes are called fursuits, which are costumes furries create and wear based off a character they may have created. People within the fandom call their individual characters their “fursona.”

One misconception about furries, however, is that people think that every furry owns a fursuit. While there are a lot of people in this fandom who do own a fursuit, they can be very expensive. With the cost ranging anywhere from $700, to over $3000 for one fursuit, almost all of them are custom made to fit the person who owns it.

There are conventions all over the world dedicated for furies to socialize and meet more people within the fandom. One of the more well-known furry conventions, that’s also close to Sacramento, is “Further Confusion,” located in San Jose.

This furry convention takes place every January, and in 2019 it had a total of 3,850 attendees, according to Further Confusion’s website.

This hobby is definitely out of the norm and it’s arguably an expensive one as well. So why do people enjoy it so much, and what about this fandom attracts so many people?

For some people, myself included, it brings happiness into their lives. Being apart of a community that’s friendly and supportive to anyone no matter their race, religion or sexual orientation.

Being a furry may be strange to anyone who doesn’t know a lot about the fandom, and just because they have their negative stereotypes it doesn’t mean they apply to everyone. I’m a college student at American River College studying to become a journalist, and in my spare time I love to spend time with friends dressed up in my fursuit, playing the role of my fursona that I created, Kuma Raccoon.

We all have our hobbies, and mine allows me to escape from reality for a short time, and express my creativity in my own way.