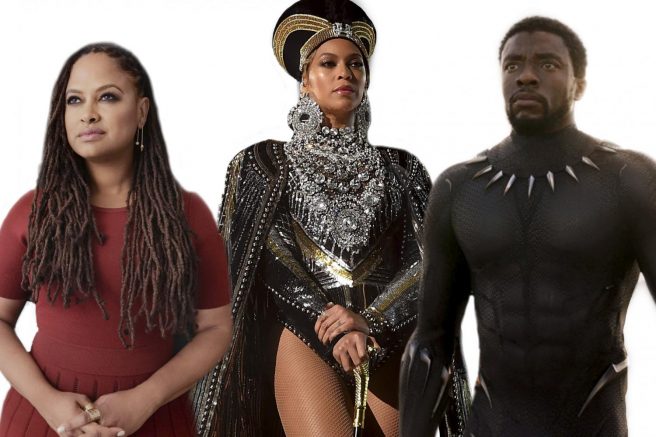 Award show committees often fail to acknowledge the talent black people showcase in the projects they put out. (Photo illustration by Alexis Warren)

I am a huge fan of watching award shows and the excitement I get when awards season approaches every year is pretty embarrassing, but it’s something that will never change.

During an award show, viewers often chime in on Twitter using a specific hashtag, with their opinions on the celebrities who win and/or lose awards. The Emmys, which took place in September,  brought to my attention the lack of appreciation shown towards black people by these award show committees.

Typically, I tune in to the Grammys, Emmys, Academy Awards, Golden Globes and the MTV Video Music Awards.

Starting with the Grammys, there are only 10 black people to this day who have won album of the year, the most recent dated back in 2008, when it was given to Herbie Hancock. The last black female artist to win Album of the Year was in 1999 for Lauryn Hill’s “The Miseducation of Lauryn Hill.”

Throughout the years, the Grammy awards committee has continued to shun well-deserving black people.

At the 2017 Grammys, Adele’s “25” won Album of the Year over Beyonce’s “Lemonade.” And unlike most privileged white people, Adele took the time to acknowledge Beyonce’s work, despite what the awards committee chose.

“I can’t possibly accept this award … my artist of my life is Beyonce. The ‘Lemonade’ album was just so monumental and so well thought out, and so beautiful and soul-bearing,” Adele said during her acceptance speech. “All of us artists here, we fucking adore you. You are our light.”

How are we possibly living in a time when Beyonce has zero Album of the Year awards?

Moving on to movies, “Black Panther” earned Marvel Studios its first Golden Globes nomination for best picture in the drama category earlier this year. The movie received a total of three nominations, but don’t hold your breath. The predominantly black cast (and black director) went home empty handed, losing to “Bohemian Rhapsody” and “A Star Is Born.”

Guess we’ll just tuck the well-known “Wakanda Forever” salute in our back pocket.

Ava DuVernay is the director and writer behind the Netflix series “When They See Us,” based on the “Central Park Five” or the Exonerated Five. Although actor Jharrel Jerome won an Outstanding Lead Actor in a Limited Series or Movie at this years Emmys, DuVernay was completely overlooked as a black female filmmaker.

DuVernay was nominated for three categories; one each for her directing, writing and producing of the limited series, and she took home none despite the impact and outrage the Netflix series brought to the public.

At the 2019 Creative Arts Emmys, Beyonce’s concert film/documentary “Homecoming,” based on one of her most popular performances at Coachella, earned a whopping six nominations. Out of six, she and her team won none.

The most shocking loss amongst the six nominations was in the Best Variety Special (Pre-Recorded) category, which went to James Corden’s “Carpool Karaoke.” A show recorded in a Range Rover with embedded cameras won over a cameraman who did actual moving stunts, including walking down a pyramid of stairs to get the perfect shot. I’m talking to you Ben Hagarty.

Are black people ever going to get recognized at these award shows or should we only expect that from the Black Entertainment Television (BET) awards?

Enough is enough. The recognition needs to happen now while these talented women and men are still alive, not with some lousy tribute when they’re dead.