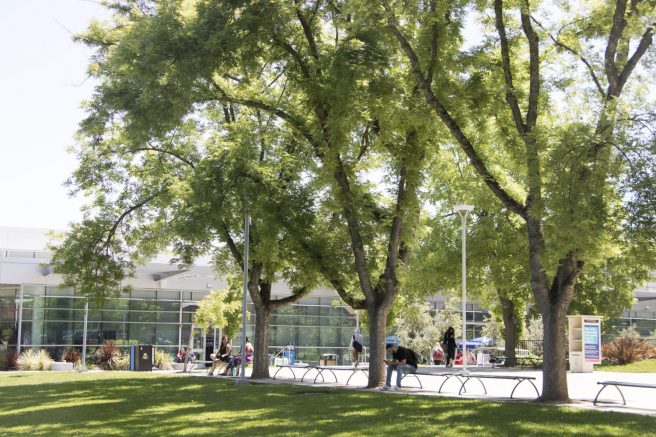 Students took advantage of the beautiful American River College campus between classes on May 2, 2019. (Photo by Makenna Roy)

I was the kid in high school who thought that if I went from taking Advanced Placement classes, to taking courses at a community college then all of my hard work would have been for nothing— but was I wrong.

In my experience the only difference between transferring to a four-year college right out of high school is the price.

When I graduated high school I was set on going to California State University, Sacramento in the fall of 2017, I even went to the New Student Orientation day and everything. When I got there, however, I realized that there it wasn’t the right fit for me at the time, so I took a step back and evaluated my specific educational goals and what I needed out of my education.

The next thing I knew I was enrolling in classes at Sierra College and my decision significantly decreased my stress levels. Although I entered college already knowing my major, I still went into my freshman year not knowing what to expect for my journey.

While the classes I took and the professors I had at Sierra helped me to hone in on my path, the campus didn’t feel right — now I’m here at American River College.

I never intended on transferring from Sierra to another community college, but I guess that the ease of transferring between community colleges is what has given me the opportunity to find a place where I fit and find professors that want to see me success, not only in their classes but outside of them as well.

Even with a plan, it took me about three semesters to figure out if I was on the right path and I would have to credit my professors for that. In my experience at a community college I have been able to create bonds with my professors, that possibly wouldn’t have arrived if I was in a freshman class of 100 at a four-year.

While, you are taking the same classes at a community college, you are also able to get more one-on-one time with your professors because the class sizes are smaller and it is easier to gain their attention or create a relationship because there aren’t 80 or more faces to memorize in on class.

For a single semester as an undergraduate, Sac State in-state tuition costs $3,684 and that doesn’t include a parking pass, books or class materials, whereas the average cost per semester at ARC is around $1,104 for in-state tuition.

By paying less in tuition I have been able to not only pay for my education without taking out loans, but I have also been able to take classes that interest me, without the added stress potentially wasting my money.

I have been able to take classes that I wouldn’t have at a four-year because of the intimidation factor of it “not being in my wheelhouse,” but I feel comfortable enough here at American River College to branch out without that concern.

Besides the money, I have also been exposed to a more diverse demographic of people than if I had attended a four-year straight out of high school.

While taking both general education and major courses at both ARC and Sierra, I found that while the majority of my peers were a similar age, the classes weren’t oversaturated with students directly out of high school because the classes at a community college aren’t specifically dedicated to freshmen.

With my time nearing an end at ARC, I feel as though I have many experiences that I will be able to take with me and use to help me down the road and in my future ventures.