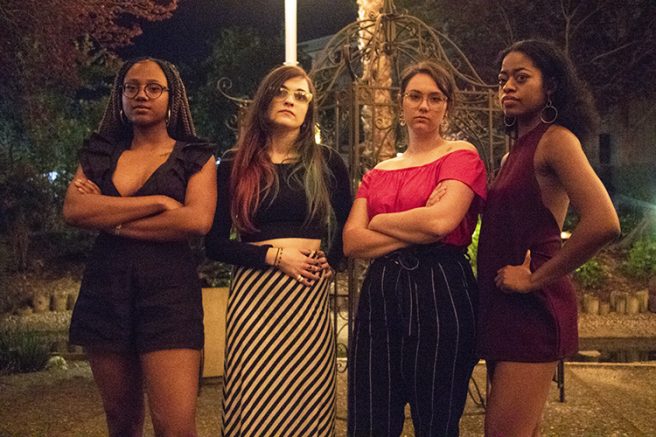 Current editors (from left to right) Alexis Warren, Hannah Yates, Jennah Booth and Imani Smith are unapologetic about being assertive in the newsroom. (Photo by Ashley Hayes-Stone)

“It’s cool that you can be mean to people and not care.”

I’m not an unkind person, so a passing comment like this, despite its genuine intent, would typically send me into a confused panic just nine months ago. I would search through all of my social interactions, trying to find the exact moment when society had deemed me a “bitch,” and I had unknowingly accepted the label.

My first semester as an editor for the Current taught me that, after years of battling internalized guilt over societal constructs surrounding my gender and how it’s supposed to dictate my personality, I should stop apologizing for the traits that make me a strong leader.

Most people’s first impressions of me could be condensed into comments like, “you scared me at first,” “you’re pretty intimidating,” and “I thought you hated me.”

Some combination of my reserved demeanor and unenthusiastic natural expression — or resting bitch face (RBF) as society has formally labeled it — acts as a social repellent that I’m never actively aware of, and did not ask for.

My facial expression doesn’t make me a bitch; it makes me serious about what I’m doing. My enthusiasm is not bossy, it’s me caring about my work and the newspaper I represent. And if my passion makes me “mean,” then I’m not sorry.

Social constructs surrounding gender have long concluded that women are expected to be beaming examples of happiness, openness and comfort. Unfortunately for me and my femininity, my face does not agree.

This stigma is not uncommon among women. In 2016, research firm Noldus Information Technology used the company’s facial recognition software FaceReader to try to determine what causes some people’s neutral expressions to be perceived as RBF.

NIT behavioral researcher Abbe Macbeth told the Washington Post that after analyzing over 10,000 human faces, RBF was found to be equally common among both men and women.

“RBF isn’t necessarily something that occurs more in women, but we’re more attuned to notice it in women because women have more pressure on them to be happy and smiley and to get along with others,” Macbeth said.

This sense of my unintentional intimidation towards others was amplified in leadership positions, and came to a paranoid peak when I found myself responsible for 13 other writers and the content we produced for our college’s student-run paper.

I assumed every request I made would be perceived as aggressive, bossy or mean. My relationships with my peers were riddled with paranoid assumptions that they hated me.

I was timid in requesting even the simplest things from others, and apologized for asking, even when someone had already failed to meet expectations.

Over time I realized that as a leader, there is no fault in demanding what is expected of people. Men in leadership positions are not criticized for being strict, assertive or passionate.

Emotional and compassionate qualities are traits that have come to be expected from strictly female leaders, who are often perceived as less competent because of them. Women who are strong or demanding are immediately stereotyped as “pushy” or “bitchy.”

Despite this, male-associated traits like strength, grit and tenacity are some of the most common qualities attributed to powerful female leaders according to Forbes, which asked eight members of the Young Entrepreneur Council to share one trait that modern women leaders should possess in 2017.

In August 2018, Business Insider listed the mere 25 female CEOs of Fortune 500 companies that year. Women representatives don’t even reach 30 percent in most areas of government in 2019, according to stats from the Center for American Women and Politics.

I used to smother the qualities that make me a good leader in fear of being disliked, and I don’t think I’m alone. Narratives about women are changing, but how many women are still silencing themselves in fear of the “bitch” label?

My position is something that I’m passionate about and my personality is catered to. There’s a reason I’m in this position and it has nothing to do with how much I smile. I want to continue to learn and push myself without shackling myself to the fear that I won’t be liked because of it.

I’m not going to stunt my growth or abilities due to outdated gender norms. I care about what I do and I won’t continue to apologize for my passion, my competency or my face.

With flu season here, experts advise people to get vaccinated