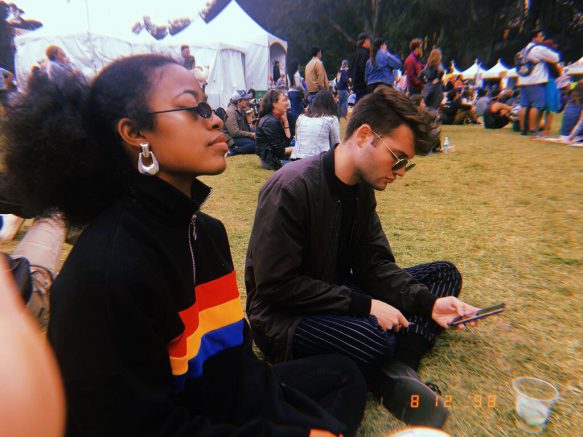 With the 2019 music festival season underway, it’s time to prepare yourself for all of the pictures that are going to be flooding your social media feeds.

While festivals can be a time filled with a fear of missing out for those who aren’t attending, I believe music festivals are a time for people to detach themselves from the problems they face and live without the stress from their daily lives for a few days.

Festivals are ultimately known for the music and artists that fill the lineup, but listening to music isn’t the only activity taking place. Festivals include many different food and drink vendors as well as a place to see artists showcasing their pieces of work.

“People usually express that they as well wanted to go to whatever festival I’m going to,” Scott said. “A lot of people also ask how much the overall trip is.”

While the prices for music festivals can look daunting — for example, $429 for Coachella, in Indio, California, and $385 for Outside Lands, in San Francisco — the amount of just one artist alone that you can see at a festival tends to come in under the price of seeing those same artists separately. With general admission concert tickets for a single show costing upwards of $120, the chance to see just four artists on a festival lineup evens out the ticket prices.

Ariana Grande tickets for the Golden 1 Center stop on her “Sweetener: World Tour,” for example, are currently being resold on Ticketmaster for $254, in the 200 section — which is the lowest price. For a little less than double the price to see Grande on the “Sweetener” tour, a Coachella ticket could’ve been bought to see her perform and other artists, such as Bazzi, Childish Gambino, Khalid, Solange and many more.

“For how much you spend you get to see 20-[plus] artists that would be hundreds of dollars more if you saw them individually,” Scott said.

College students’ lives are regularly filled with stress due to classes and exams as well as working and trying to manage it all, if they can find the time to take four or five days away from it, detached from the world, listening to as many artists as they can, then the opportunity should be taken.

In my experience, festivals feel like attending multiple concerts in one day. Once an artist finishes their set you have a little time to go and grab food and drinks from one of the many vendors and use the bathroom, then the next thing you know you’re back in a similar spot waiting for another artist to get on stage.

Three days listening to music from 11 a.m. until 10 p.m. may be draining, but it can be a more practical choice than taking off two or three days of work a month to go to concerts. Instead of asking for multiple days off from work, weeks apart, to see some of your favorite artists you’re typically just asking for a Monday and Friday off.

“Having all these different kinds of cultures and groups coming together in one place for music, you can really branch out and see the world in just one place,” Scott said.

While at a festival the hot sun may be beating down on your body and you are surrounded by thousands of people that you’ve never met before, you have the opportunity to create lasting memories with those you attended the festival with.

Being surrounded by thousands of strangers may seem intimidating, but at festivals people are able to share experiences with only those that are in attendance.

College is a time for people to find who they are and where they fit in the world, and music can be a large part of that. Music is a form of self-expression and can help people find themselves and figure out the the path that they want to follow.