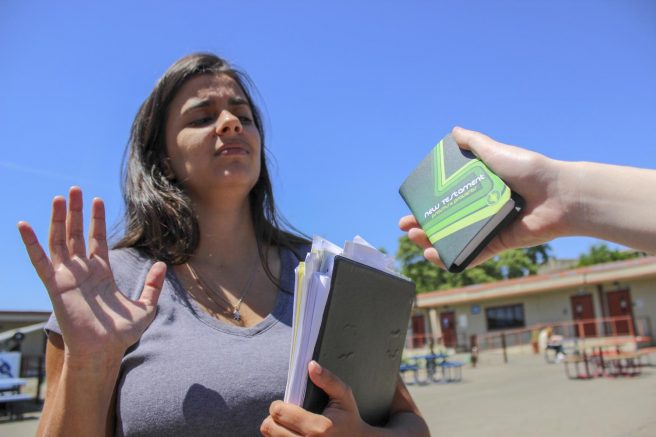 Religious protesting on campus may grab attention at first, but this method of evangelism can be frightening and turn people away. (photo illustration by Ariel Caspar)

When you’re on the receiving end, religious protesting can be a total spectacle. There are usually one or two individuals standing with a crowd circled around them. There is usually some kind of a sign involved with questionable material and then the blunt commentary of the protester that involves their beliefs about various topics.

It may be hard to imagine that this is actually an approach to evangelize and spread the good news of the Gospel. Sometimes that can be hard to believe when the sign being waved says something like “Hell is hot. Repent.”

All I can say is these people must believe their tactic will reach at least one individual who is questioning his or her beliefs. Maybe they think this tactic is effective for college campuses and who knows, maybe they’ve had some good results.

This approach is certainly attention grabbing and may turn a lot of heads, but I don’t approve of this evangelism method. I think these individuals have a heart for reaching the lost, but that reach can only go so far when listeners are having a hard time understanding the motive behind the message.

When I think of the protesters who were recently on campus, I have to remember they’re obviously doing it for a cause they believe in enough to risk being mocked by college students. As much as I disapprove of their methods, I also praise them for being brave enough to even show up. It takes a lot of guts to take a stand for what you believe.

Whatever your opinion on the matter, I’m here to straighten things out for those who may be frustrated, annoyed or confused. I believe there should be ethics to religious protesting and evangelism just like there are ethics to everything else.

You may be wondering what my background is now that I’ve told you I’m familiar with religious ethics, and to answer your question, yes, I am a born again believer. An evangelist? Not so much. But I have spent my fair share of time involved with churches and other religious, missions-based groups to know the do’s and don’ts of evangelism.

The biggest concern I have with this type of religious protesting is that it may be distorting and misrepresenting the Christian faith. I don’t have a problem with people wanting to evangelize, it’s just the way they have gone about it that is concerning to me.

A Bible verse I have often used when making decisions in speech and in action is “Let all that you do be done in love,” 1 Corinthians 16:14, and much of the evangelism I see today does not feel loving, but frightening.

From the protesters’ perspective, I think the main goal is to grab attention by using scare tactics involving Biblical truths in the Christian faith. But is scaring people really working? I think it depends on the person.

Personally, I laugh a little. Not because I think these people are stupid or pathetic, but because I think to myself that there are so many other practical ways to evangelize, without stepping on toes, offending or stirring the pot.

Scaring people is not a great approach to evangelism. Holding up a sign with frightening material grabs attention, but it does not draw people in with that warmth and love that everyone craves deep down.

A few weeks ago, there was a religious group protesting on campus. The group included two speakers/sign wavers, and others who were handing out copies of the New Testament, Psalms and Proverbs from the Holy Bible.

I was not offended by the people offering Bibles to passerbys, but I was offended by the language on the sign which read “Hell is hot,” and the topic of their preaching. From a distance it sounded like rambling, but a closer listen revealed some frightening material about the end being near and repenting from evil works. The speaker referred to our campus as a dark and evil place. When trying to evangelize, I’ve discovered that being judgmental is not effective.

The better and more ethical approach to evangelism is building relationships and creating a safe space to talk about what you believe. If that person wants to know more, fill them in. If they want to accept Christ later on, great.

Regardless, it will always be something that takes time, trust, and ultimately letting the unbeliever make a decision about what kind of life they want to live. I don’t think It’s about bombarding people with scriptures they may or may not understand, and making people feel condemned for their past mistakes. Christianity is actually about no condemnation!

As a believer, my goal is not to put these protesters down. They do have the right to be on campus and to evangelize however they please. No matter how they go about evangelizing, I will continue to focus on loving and accepting people as Christ would. There is a more loving approach.

Be the first to comment on "A different approach to evangelism"