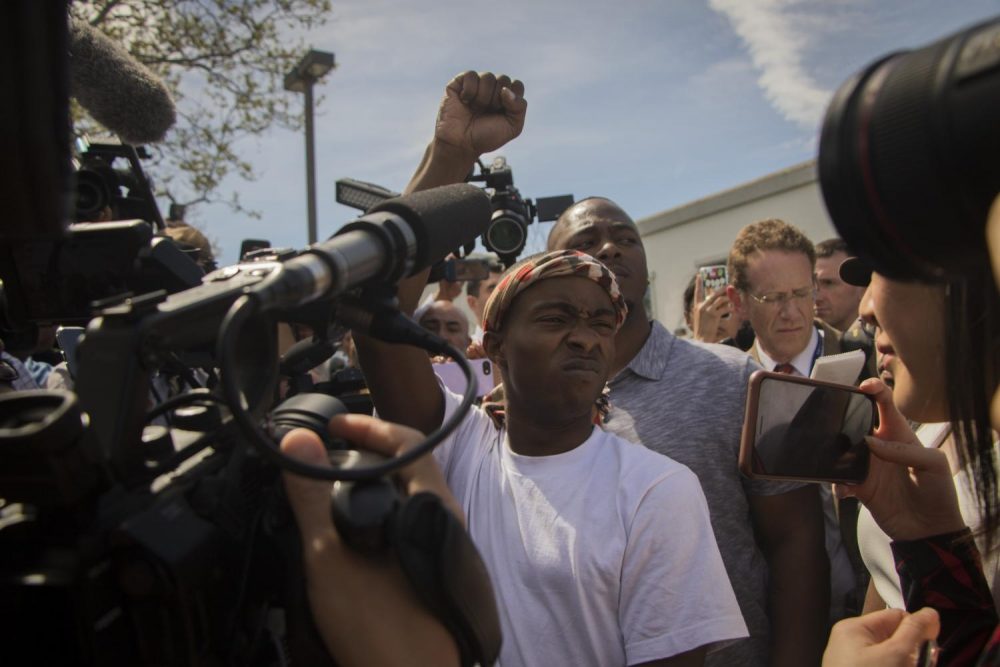 Stevante Clark speaks to the media regarding his brother Stephon Clark's death at the Bayside of South Sacramento Church on March 29, 2018. (photo by Ashley Hayes-Stone)

Since the beginning, journalists in the United States have been taught to live by objectivity, but in our world today that’s becoming more and more difficult to do.

In the aftermath of Stephon Clark’s death for example, there has been backlash towards the press in Sacramento in regards to the coverage of his death and the circumstances around it.

In cases like this, the sensitivity of the issue stirs up a lot of emotion within people, journalists included.

The public overall tends to forget however that we as journalists are people with strong opinions, biases and feelings just like non-journalists. We have a tough job being aware of these biases and opinions and keeping them check when it comes to our work.

There is also a lack of respect from the public for journalists and the important job that we do, and the public needs to take the time to educate themselves on our role in media and how we’re supposed to go about accomplishing that.

In the media, however, there is a problem with how stories like these are covered and the angle they are reported.

For example, the public rightfully becomes upset when an unarmed person of color is not only gunned down by police, but afterwards, their criminal past and lifestyle overall is picked apart in the news.

The aforementioned occurred in the cases of Mike Brown, Alton Sterling, Stephon Clark and countless others.

As another example, Clark’s brother Stevante Clark has been portrayed as ridiculous or ignorant in the media because of how he chooses to grieve his brother’s death.

There is an unfair hypocrisy from the public towards the media, we’re often looked at as “vultures” or “disrespectful” for covering the story.

Simultaneously, if we were not to do our job and cover it, the public would be upset and feel as though we aren’t giving attention to what’s important to them.

For example during a protest on April 4, mere days after Clark’s death, one of his family members spoke on his family’s behalf. She became extremely emotional and began to cry and fell to the floor.

Reporters, including myself, saw this as a important photo opportunity and began shooting; in the meantime leaders of the protest began yelling at us to stop photographing due to the sensitivity of the moment.

Protesters continued to yell and cuss at reporters in their faces and through a megaphone as they tried to get their photos and sources.

Media outlets were then pushed to one side of the street and yelled at to “say his name.” All of this transpired in front of the district attorney’s office, a public setting. In that moment, it’s as if the crowd disregarded our right as journalists to photograph and document in a public place.

These protesters and how they interacted with the press, irritated me as a journalist. I know that the journalists that were present weren’t there to exploit or take advantage of the family. The reporters were only doing their job.

On a personal level as well these protesters angered me. I fully support the Black Lives Matter movement, but while I, or any other journalist, are on the job we have to leave our biases and opinions at the door.

Doing this doesn’t mean we don’t support the cause any more or any less, or that we’re putting our jobs before our personal values.

As journalists it isn’t our job to be liked by the public 100 percent of the time. It is our job however, to serve the public and to do our due diligence when covering events and issues that may be sensitive or controversial.

The public has a responsibility and right as well to question the media and journalists.

Just as much as the media needs to continuously work on reporting fairly, the public needs to work on being more understanding of the role of media and journalists.