‘Farm to Fork’ does not represent Sacramento 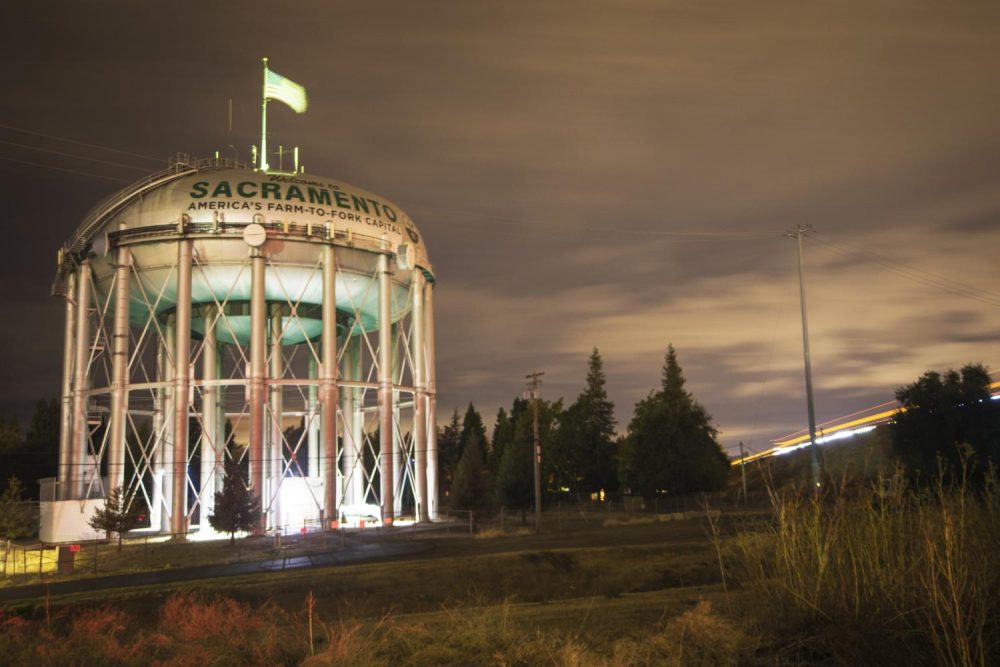 The Sacramento Water Towers illuminated by drivers on Interstate 5 on Nov. 13. The 'Welcome to Sacramento' water tower sits in the Pocket-Greenhaven neighborhood. (Photo by Luis Gael Jimenez)

Growing up in Sacramento I always knew that my hometown was the City of Trees, I remember looking out across Midtown as a child and thinking Sacramento looked less like a city and more like an elvish kingdom sprung up amongst a great forest canopy.

The trees are a part of life in Sacramento, from a cool place to sit during July, to the picturesque changing of the leaves and their subsequent fall to occasionally slipping on an American sweetgum tree seeds (those brown spikey balls).

As part of Sacramento’s ongoing campaign to become Silicon Valley East, “The City of Trees” moniker was removed from the Freeport water tower along Interstate 5 on March 9 to read “America’s Farm to Fork Capital.”

This rebranding was intended to highlight the area’s agriculture and commitment to sustainability, but in reality it stripped Sacramento of a point of civic pride and beauty in favor of a poorly thought out marketing campaign designed to attract Bay Area transplants who are more concerned with appearing to live organic than actually living green.

But the “City of Trees” slogan reflects the fact that Sacramento is the greenest city in America.

Sacramento has more trees per capita than any other major city in the United States; in fact, we are bested by only Vancouver and Singapore worldwide according to an MIT study reported in Sactown Magazine, making Sacramento America’s greenest capital.

Meanwhile, it is true that Sacramento is the capital of the largest agricultural state and it does have farm to fork restaurants, and to be fair, a lot of farmers markets, but I don’t think Sacramento is a major stop on any foodies’ bucket list.

Sacramento’s arboreal roots, however, go all the way back to its founding when immigrants from the Northeast began planting trees as a respite from Sacramento’s notoriously hot summers.

UC Davis, Sacramento State and American River College have all received “Tree Campus USA” designations from the Arbor Day foundation; even local municipalities like Orangevale, Citrus Heights and Fair Oaks are named after the trees.

If Sacramento really is trying to become another home for tech companies then it should advertise something that is unique and authentic, and welcome people to exchange the Bay Area’s concrete jungle for Sacramento’s urban forest.

So with all appreciation of the Sacramento area’s wonderful agricultural communities and restaurants please get the fork out of my city of trees.