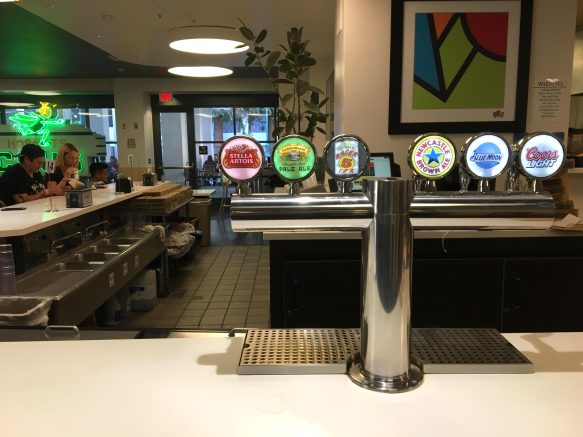 Imagine having a cold beer in such a stressful environment like college. It is more than possible if done correctly.

American River College should consider serving beer on campus in a responsible manner.

This campus could use a restaurant or two that are capable of serving alcoholic beverages.

Currently, restaurants on campus such as the Oak Cafe, Subway and Starbucks do not serve alcohol.

Sacramento State, however, has restaurants such as a Round Table Pizza that serve beer responsibly with rules that must be followed by students.

Round Table assistant manager Dan Salter had his experience working with alcoholic beverages on a college campus.

“Here on campus, we have strict policies that are posted in our restaurant on how to regulate and enjoy drinking in a mature and limited manner. Once a valid ID is shown, the student can have no more than three beers a day and can’t leave the restaurant,” Round Table assistant manager Salter explained.

To serve beer on a community college campus is easily possible but it must be regulated appropriately.

Eric Graham, 47, an art major at ARC, thinks an occasional drink on campus would make for a better day.

“After taking a difficult test and or waiting for transportation, it would be so nice to enjoy a beer or two in the meantime,” Graham said.

Life is always happening, and having the opportunity to unwind a little at school would do no harm.

Drinking takes on a big role in socializing with new people and peers.

Political Science major Emily Manzer, 23, thinks it’s a great idea to have beer on campus when it comes to meeting new people or trying to de-stress.

“Having the ability to drink on campus would make it more incentive to stay on campus and it would be nice to meet other students due to how drinking is a social norm already,” Manzer said.

Be the first to comment on "Opinion: The thirst for something more at ARC"