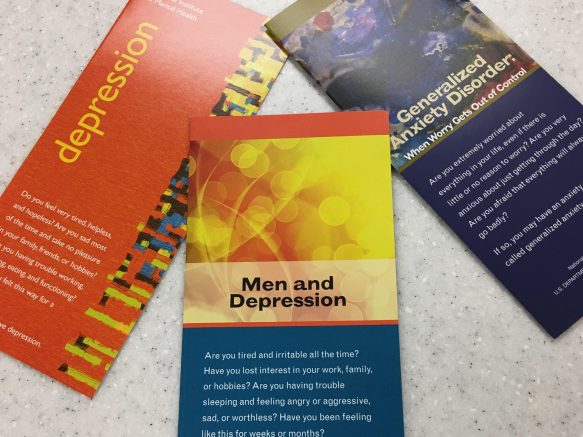 Seeking assistance for mental health problems can start with something as simple as picking up a brochure at ARC's health clinic. (Photo by Shiavon Chatman)

There are a few taboo topics usually avoided at all costs in conversation, including sex, politics, religion, and mental health.

Especially in the black community, mental health is something that is hardly ever addressed.

Rapper and actor Kid Cudi recently admitted himself to rehab to treat his depression and suicidal urges. He penned a nearly 400 word statement on his choice, which he then published to his Facebook page.

In response to his admission via social media, black men began to share their experiences with depression and suicidal thoughts using the hashtag #YouGoodMan.

Mental health is primarily ignored in the black community, often simply treated with a “man up” or those are “white people problems.”

The idea that black men can’t be upfront and honest with their mental illnesses stems from hypermasculinity.

Hyper-masculinity is the idea that implements the male stereotype of super strength, both physically and emotionally, and the hinderance of showing emotion.

“I always feel like I have to be the tough guy. I was depressed in high school but I didn’t talk about it with anyone because that’s not what people do where I’m from,” said ARC student Isaiah Bishop.

Using the hashtag, men began sharing what they used to help treat their mental illnesses and also what people do that is often counterproductive.

Some said hearing “what can I do to help you?” was very helpful, while hearing “just calm down or get over it” didn’t help at all.

“Smoking (marijuana) helps me cope with the pain sometimes. I just hate hearing “just get over it’” said black ARC student Damien Russell.

Anxiety is something that consumes your life often making minor things most people take for granted very difficult.

Hearing “just calm down” or “you’ll be fine” often makes the situation much worse.

“Sometimes I feel like nobody cares. I look up to Kid Cudi for seeking treatment but when you keep that stuff bottled in it can result in a suicide or you could just lose your mind,” said ARC student Noah Wells.

When an individual living with mental illness feels as if their problems are being belittled they often escalate.

“I think race plays a huge factor in it. My parents are black and white and they look at mental illness much differently. My dad is black and he always taught me to be tough and my mom is white and she always taught me to say something when I need help. So, sometimes I feel really torn. I really look up to (Kid Cudi) but even more now because now he’s a role model for people who suffer from depression,” said Wells.

Addressing mental health in the black community is important because it holds people accountable and can possibly supply assistance to the systemically and culturally silenced.