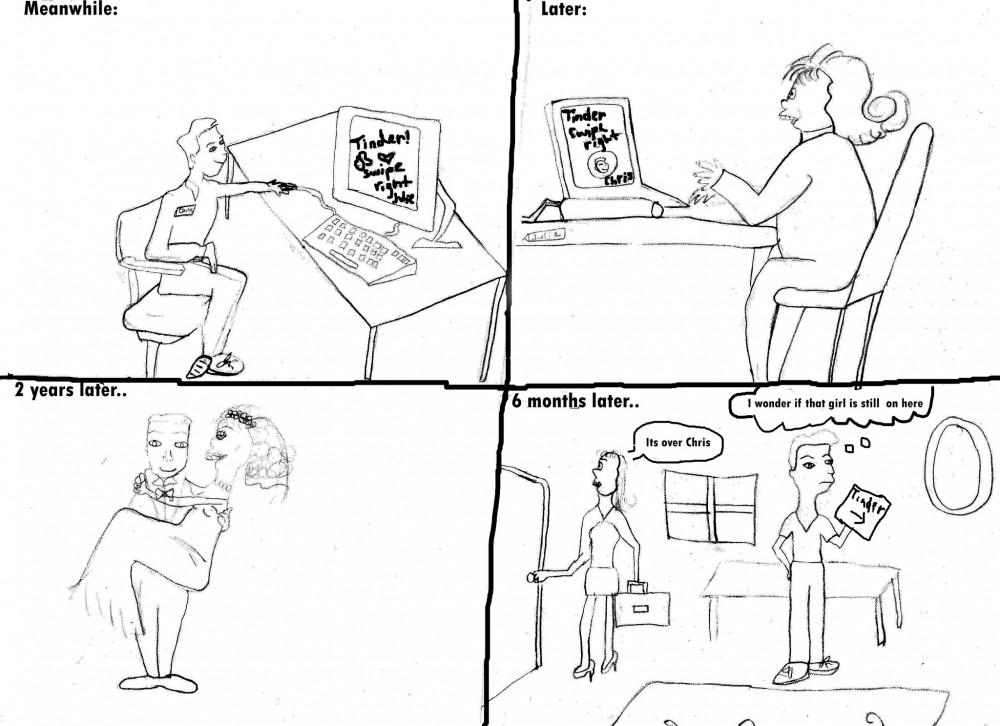 With the rising popularity of online dating, the possible matches are endless. This might not necessarily be a good thing. (Illustration by Allante Morris)

When social media technologies are introduced into the world, human behavior adapts. Romantic relationships are no exception.

With the touch of a screen, we can deliver food to our doorstep or beckon for a ride to the airport. It’s wasn’t a leap for relationships to begin filtering through phones as well.

With the rise of apps like Tinder, where you link your Facebook profile and shuffle through a “stack” of profile pictures and one-liners designed to hook you, online romance is more accepted – and more remote.

Finding that special someone can be as easy as a right swipe and a good pickup line “slid in the DM’s,” but perhaps that simplicity is erasing something deeper.

Can a connection formed first and foremost off of your physical features and mutual friends lead to a happily ever after? Do the people using these apps even want it to?

In that same study, the Pew Research Center also discovered that one in three people had yet to meet up with someone they’d met via the internet.

Many young people feel like these apps eliminate the dreaded awkwardness of a potential rejection.

When it’s just a badly lit selfie in an app, it doesn’t matter as much if you don’t match, because the connection isn’t there yet. When it’s a person standing in front of you, it’s a very personal rejection.

With online dating, there’s no need to compromise – you can just keep swiping until you find the elusive “something better”.

There are specialized apps too – ways to further narrow down the pool.

With just a tap on Tinder, someone’s age, school, interests, mutual friends and photos from the last weekend out are immediately accessible.

It’s a legitimate way to do something people have already been doing – online stalking someone they just met. Another Pew Research Center survey found that 29% of internet users go online to search about someone they’re dating or about to go on a first date with.

These apps are suddenly providing people with personal details that would have at least taken dinner and a movie to get before.

Of course there are the horror stories – the guy who isn’t, in fact, Chris Hemsworth, or the girl who starts showing up every time you’re in a coffee shop. But when people are allowed to give an idealized presentation of themselves, there’s a chance for a bit of reality distortion.

It could be argued, however, that the matches gone right breeds an immediate chemistry, because you already have a rough idea of who this person is.

No more awkward “getting to know you” conversations, because we’ve already gotten all of that information, barring your favorite color.

Perhaps Tinder really is the future – but in the present, a well-timed compliment might be the better way to go.