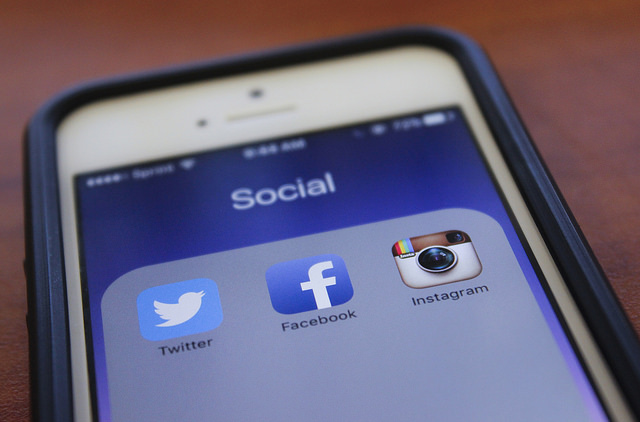 A smart phone screen sits ready to open various social media sites. The digital age has its own way of dealing with death, but it might not be healthy. (Photo by Hannah Darden)

Everything has changed in the many hands of the internet – including how death is processed.

With everyone living their lives online, it’s no shock that death has its place there too.

The latest culture shift has taken a final moment and made it something that can be double tapped, liked and commented on, sometimes before anyone has even realized it’s happened.

Social media is connecting us more than it ever was before, but it is also making it easier to be apathetic.

In a moment where more and more social media audiences are made up entirely of complete strangers, the very personal matter of a death is becoming increasingly public.

Digital word of mouth in the form of retweets, screenshots and comment sections can be composed of people who know next to nothing about the deceased.

It would be more sincere to call up the surviving family and express condolences beyond social media.

It’s the equivalent of a shop employee muttering “have a nice day” as you walk out.

The emotion is being erased from one of the two human experiences everyone is promised.

An argument for sincerity can be made, but there’s still the question of why strangers participate.

Some of these online outpourings seem to be more about taking the stage to give an insincere performance, rather than honoring the memory of the deceased.

Technology, and social media specifically, are often blamed for creating an apathy among the youth.

However, this isn’t solely a millennial feature – or even strictly applied towards death.

So many relationships between people of all ages and backgrounds are born, live and die on the back of a wi-fi signal, in a box that asks “What’s on your mind?”

Our smart phones hold all the people we know, and often ones we don’t.

No one needs to “keep in touch”, because our fingers are on our screens.

Too frequently, those accumulating the likes on this 21st century obituary aren’t those you’d expect to be sharing such sad news either.

They’re the friend-of-a-friend, someone from a childhood long forgotten.

There’s an eerie air of profiteering that surrounds this, as though a tragedy is social media gold.

It comes to a point where one can begin to wonder if all reverence and respect will be erased amid a flood of likes and favorites.