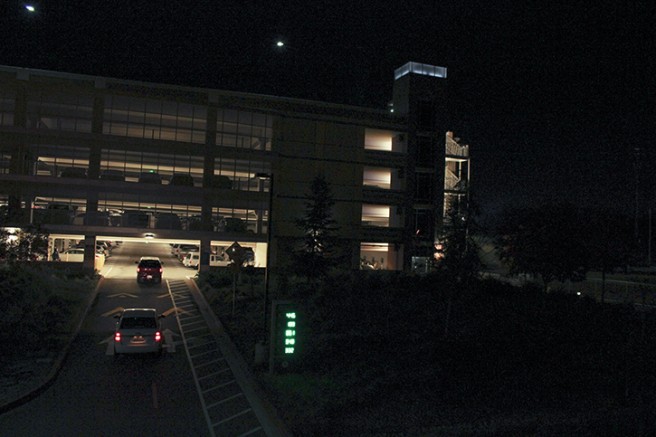 With the end of daylight saving time, many students have classes that start after the sun goes down. Installing LED lights would increase the safety of students during the nighttime on campus. (Photo by John Ferrannini)

Walk around the American River College campus after the sun has gone down and it can be a rather dim and dark place.

ARC should look into installing LED lights throughout its campus and parking lots.

Breezeways and almost any area not inside Davies Hall or immediately next to a classroom door is either poorly lit or not lit at all.

Surrounding streets to the ARC campus such as College Oak Drive and Auburn Boulevard have installed LED streetlights in recent months, making areas on those streets much safer to walk in during later hours.

It was certainly a good idea on Auburn Boulevard, where a serial rapist victimized multiple women in early 2014.

It is best to take preventative action now rather than doing so after a major incident has occurred.

An ARC student was the victim of a strong-arm robbery on Oct. 19 at the No. 1 bus stop at College Oak and Orange Grove Avenue.

This area also recently installed the lighting, and though there isn’t complete safety in better lighting, it certainly helps visibility for witnesses.

There are several open areas on ARC’s campus where walking alone at night can be an intimidating thought for some, and in another sense some of the lighting is simply outdated.

Many students feel very uncomfortable walking from a class that ends at 9 p.m. to their car across the pedestrian bridge and halfway down the stadium parking lot.

Having LED lights installed around the campus and in the parking lots would make it much easier to see suspicious activity from a distance that could then be reported to police.

Additionally, it could help ease the minds of those who are uncomfortable walking around the campus late at night.

Be the first to comment on "Opinion: ARC should install LED lights"