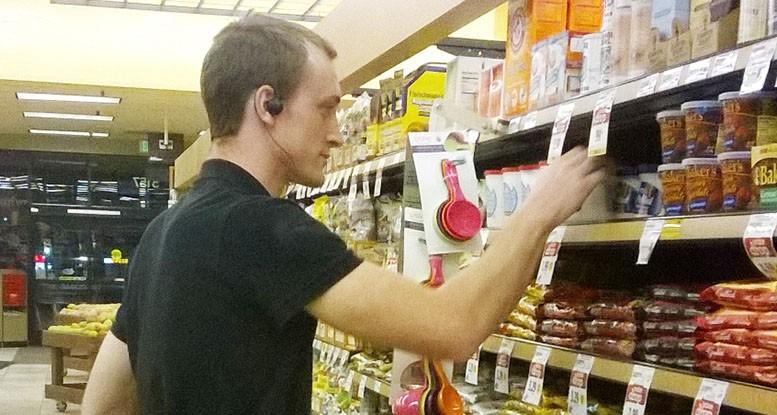 Raley’s employee Cody Drury stocks merchandise while on a shift as a courtesy clerk. Drury is a student at Sacramento State University and has been with the grocery store business for almost three years and he plans to stay with the company even after he receives his degree.

If a college student takes fifteen units each semester, they are sitting through about fifteen hours of class lectures and labs a week.

With this logic, after four years in college a student will spend over 1,920 hours in class, not counting all the extra time spent studying and working on homework.

The question to answer here is do you “settle” for a job outside of your degree?

No, you do not settle. You expand your horizons and consider all of the job opportunities at your disposal.

Gaining experience in college is not just paramount for your hopeful career field, but it prepares you for other careers you may not have previously entertained.

There are a multitude of jobs to consider and one of them, however unlikely sounding to a college graduate, is employment in the grocery business.

The national average for a Raley’s worker is $17 per hour with overtime bumped to $28.50 hourly.

The national average for a grocery store clerk, generally speaking, is $9.39 per hour.

Those who have history working with Microsoft Excel receive an even higher median salary in the grocery store business.

There are major benefits if you decide to take this route including health insurance, dental coverage and a defined benefit retirement plan.

There are multiple avenues to consider when entering the grocery business including, but not limited to, deli clerk, grocery clerk, bakery clerk, meat cutter and assistant store director. The best part is that anyone can work their way up to any of these positions.

Beyond considering the grocery business, there are a handful of other job opportunities at a student’s disposal.

A dental hygienist makes a median income of $68,000 without a degree and $130,000 with a degree, while a web developer makes nearly the same amount in median range.

Both of these employment routes require no work experience.

It would surprise many college students if they knew that entering the dental hygienist field will net them an average of $32.52 per hour with a bonus of up to $2,497.

As a web designer there are jobs in the field with full time schedules and also freelance jobs for workers who desire to make their own hours.

There are many in our community who have a college degree but who have decided to pursue a career outside of their degree field.

Raley’s employee Marcus Steele has worked at store 431 in Carmichael for just over seven years.

He made the conscious decision to stay and advance in Raley’s after he graduated from William Jessup University in 2013.

He came to the realization that he had more availability to work and that his student loans weren’t going to pay themselves.

Now in his seventh year at Raley’s, Steele is an assistant manager on his way to the top.

With only 27 percent of college students gaining employment in their major after graduating, other job fields have to be considered in this day and age.

Imagine the feeling of earning more money than you might have if you were one of the few who were successfully employed in their field post-graduation.

It’s very possible, but involves expanding your horizons beyond what you might have originally intended to go to college for in the first place.

That’s not a bad thing at all. After all, the college experience is about learning, first and foremost.

Finding your true calling in the employment field is part of that process.

Be the first to comment on "Opinion: Students need to expand their career horizons"