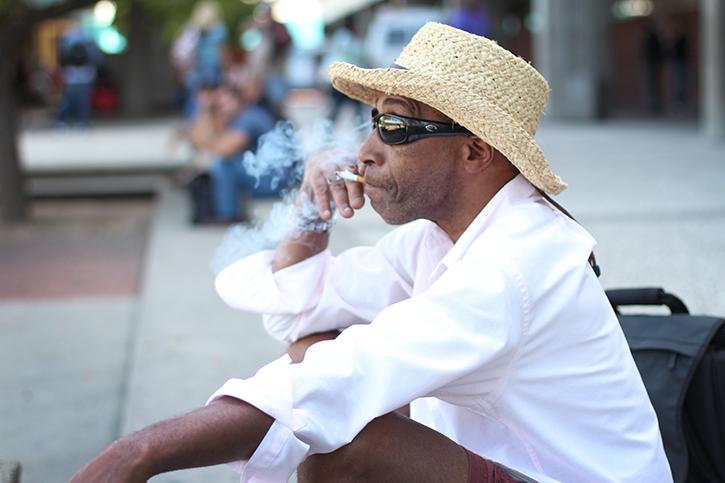 Sacramento City College has recently implemented designated smoking areas on its campus, whereas American River College's current policy allows smoking anywhere that is at least 30 feet away from any door. (Photo by Emily K. Rabasto)

By Kameron Schmid and Cameron Weaver

Sacramento City College’s designated smoking areas policy is a reasonable and fair treatment of the issue of public smoking on a college campus, and American River College would be better off to adopt it as soon as possible.

ARC’s current smoking policy, which states that smoking is not allowed anywhere within 30 feet of a building entrance, is largely ignored and hard to officiate.

Unfortunately, ARC doesn’t have hall monitors to patrol campus and stop smokers from breaking the rules. On top of that, the police officers on campus are too busy doing actual work to run around citing people for smoking anywhere they choose to.

Designated smoking areas are a simple principle that are used in many public places with little controversy.

If ARC had designated smoking areas, then anyone who was smoking outside of them could be politely told they need to move.

Chances are, unless someone was extraordinarily aggressive or inconsiderate, they’d simply move elsewhere.

In Sac City’s survey that lead to this policy, 67 percent of students indicated they are negatively affected by smoking on campus. A similar number for ARC students is likely.

It’s possible to have nothing against people who smoke, and at the same time want them to follow the rules. And right now, they don’t.

People smoke as they walk through hallways, by doors, and right by fellow students.

If smokers don’t like it, then they have two options.

One is to hop in a time machine and go back to an America when people could smoke wherever they wanted. The other is to start being considerate and follow guidelines.

Or, people could just quit altogether. But hey, I don’t want to sound unreasonable.

I’m a fan of the old adage “If it ain’t broke, don’t fix it.” American River College’s current campus policy caters to both smokers and non-smokers alike.

Sacramento City College has recently pushed closer to a smoke-free campus, barring open-smoking on campus in favor of giving smokers six designated smoking areas. This policy has been in effect since the beginning of the Fall 2014 semester.

Jason Hardeay, 21, a Computer Science major, says the important thing that will make the current college policy on smoking effective lies with the students.

“At this point, I think it’s pretty obvious not everyone follows the 30 foot rule,” said Hardeay. “If people made more of an effort to be considerate, I think there would be a better campus vibe about it overall.”

Electronic cigarettes have also fallen under these new guidelines.

While calling it “draconian” is jumping out on a limb, the recent legislation by SCC is imposing. People who partake in nicotine consumption on college campuses nationwide are a large part of the student body.

This is not to say that the current ARC policy is perfect.

Numerous students have been the butt-end of second-hand smoke from those who choose to ignore the 30 foot rule.

What should be focused on is student initiative – an improved camaraderie campus-wide that will encourage more willing observance of others’ desires to not be anywhere near cigarette smoke.

Smokers are on the ARC campus daily. They are our fellow students, friends, faculty and every other defining label in between.

Increased legislation on the issue will only stifle the already stiff lack of campus morale at ARC.  The solution lies in a more comprehensive observance of one another, a more visual display of mutual respect.

We can all work to this solution together, whether we choose to bum a cigarette or not along the way.