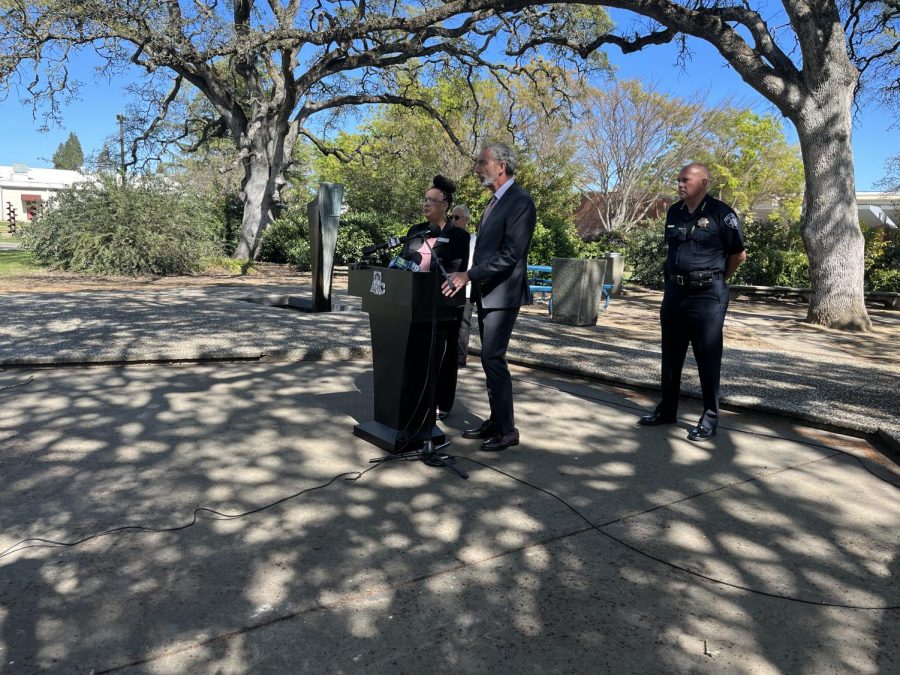 American River College President Melanie Dixon and Brian King, the Los Rios Community College District chancellor, speak to members of the media during a press conference on the ARC campus on March 16, 2022. The conference was in relation to the racist threats made against Dixon. (Photo by Heather Amberson)

On March 10, Brian King, the chancellor of the Los Rios Community College District, revealed in an email that Melanie Dixon, the president of American River College, received racist threats from a former LRCCD student.

On March 15, the Los Rios Police Department sent out an update announcing that the person who made racist threats towards Dixon was arrested on the Sacramento City College campus.

The suspect, Jamie Barnes, was arrested after calling the LRPD dispatch from the SCC campus and made claims that were unsubstantiated and violating the temporary restraining order that banned her from going to any LRCCD campus. Barnes was booked at the county jail on March 15 but was released the next morning. King says that Barnes’ time as a student in the LRCCD wasn’t recent.

On March 16, King and Dixon held a press conference on the ARC campus, along with Larry Savidge, the chief of police at the LRPD, and Pamela Haynes, a member of LRCCD’s governing board of trustees, to give updates on the situation.

“We are here today for a sad moment in the life of our college here at ARC and also the Sacramento community,” King said at the press conference. “It is a tragedy that we still have to have conversations about what has happened to our president at ARC Melanie Dixon.”

King says this is a call to action for the colleges and the community to realize that racism is a real threat.

King also had a message for Black students and employees.

“We are here for you and we have zero tolerance for this kind of despicable behavior,” King said.

Dixon says that the threats came through the voice messaging system.

“These particular calls were directed at me as a threat and as a discomfort of me assuming the role that I have here at ARC,” Dixon said.

King says that there were specific threats to Dixon, and also broader threats to the Black community at ARC and the other LRCCD colleges.

Dixon says that Barnes has a history of making harassing phone calls.

“The history is around harassing phone calls, but recently these calls have turned to threats,” Dixon said.

According to an email sent by Gabe Ross, the associate vice chancellor of strategy and communications for the LRCCD, Barnes has left approximately 378 messages for ARC administrators and staff.

Dixon says that the college and district have taken several actions since receiving these calls.

“The first of which was a temporary restraining order, not only for myself, but for all members of the Los Rios District to ensure their safety until we have a process of due justice in the court system,” Dixon said. “We will be going to court in the future to address this and push for a permanent restraining order.”

Dixon says, for now, they are satisfied with what action has been taken but that work still needs to be done to support all members of the community.

In response to the threats, Dixon says that she now has extra protection at her home and around the ARC campus.