Wonder how the Kitty Committee has operated since quarantine began? 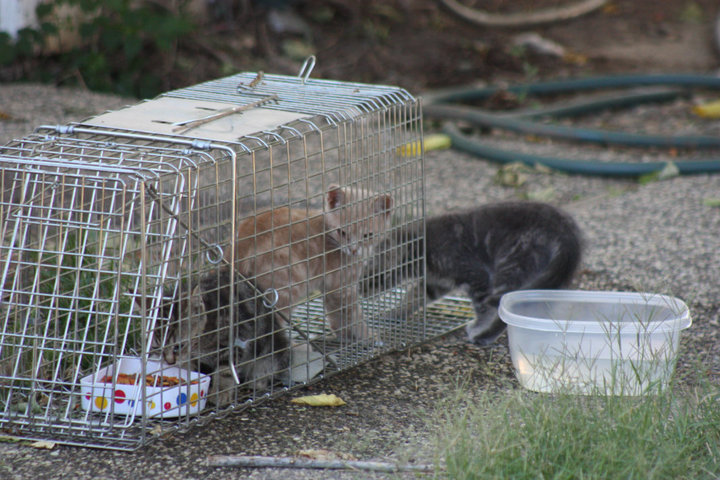 Feral kittens on the ARC campus are humanely trapped using the Trap-Neuter-Release (TNR) method by the Kitty Committee. (Photo courtesy of Becky Watts)

Since quarantine started in California last March, life has changed drastically, yet one of few things has remained the same: cats and kittens alike still occupy the American River College campus which they call home.

While the campus has transitioned to remote learning, the Kitty Committee, a subcommittee of the ARC Buildings, Grounds, and Safety Committee founded in March 2013, has continued to care for the cats who call the college home— though due to COVID-19 restrictions, they are not allowed on campus as readily as they might like to be.

Since it formed, the Kitty Committee has established itself as a solution to controlling the stray cat population in and around campus. While kittens are trapped, fed, treated, and adopted out to surrounding animal shelters, feral cats, on the other hand, are given duty under the ARC “Kitty Workforce,” a term the Kitty Committee has coined for its feral recruits to keep the local rodent population in check.

In exchange for their services, the so-called “Kitty Workforce” cats are “humanely trapped using the Trap-Neuter-Return (T.N.R.) method, fed, tested for infectious diseases, spayed or neutered, vaccinated, and returned to campus,” according to the current program section on their ARC Feral Cats power website.

The Kitty Committee was established for the sake of stray cats in and around the premises of ARC, according to the committee’s Beeta Aram.

“[H]ousecats, unlike their wild relatives, have no feline parents to teach them how to survive in an existing environment,” Aram said. “When in a different neighborhood, they’re subjected to turf battles amongst local cats and are susceptible to various diseases that, without proper and immediate care, they will eventually succumb to.”

According to a February 2014 article in the Current, it was believed that the committee housed about seven cats. However, Aram explains as the primary trapper, that there are 25-30 cats housed on-campus at all times.

While quarantine has not stopped the determination of the committee, an obstacle as the result of COVID-19 now stands in its path— the Kitty Committee has seen an estimated 80 % decrease in donations, according to Aram.

“We have managed, however, it would be nice to spread out the blessing of caring for the cats,” Aram said.

Aram adds that many volunteers working with the Kitty Committee have stepped up financially to help provide for the “Kitty Workforce,” in absence of donations.

Students and faculty alike may be wondering how cats amongst campus have reacted towards the sudden transition to remote learning.

“Most feral cats fear and avoid humans… they all know we have to co-exist and can benefit from human companionship,” Aram said. Some cats may miss having people around, but it’s hard to know.

On the opposite side of the spectrum, many staff and students had reported pre-pandemic that seeing happy and healthy-looking cats on campus calms their nerves and gives them a feeling of calm and relaxation like “being at home,” Aram said.

“[It seems] every time these articles are run, we get a surplus of cats- house cats, domesticated cats- that are dumped on campus. Sometimes it takes a year or two before we are able to do something with them- pick them up and help them,” Aram said. “The Kitty Committee is not to be viewed as a safe haven on-campus for dumping domesticated cats, or even feral cats from different neighborhoods.”

According to the committee’s website, the cats are hungry, and winter has been hard on them: cats and kittens alike are in need of food.