Enrollment at CA community colleges down from 2019 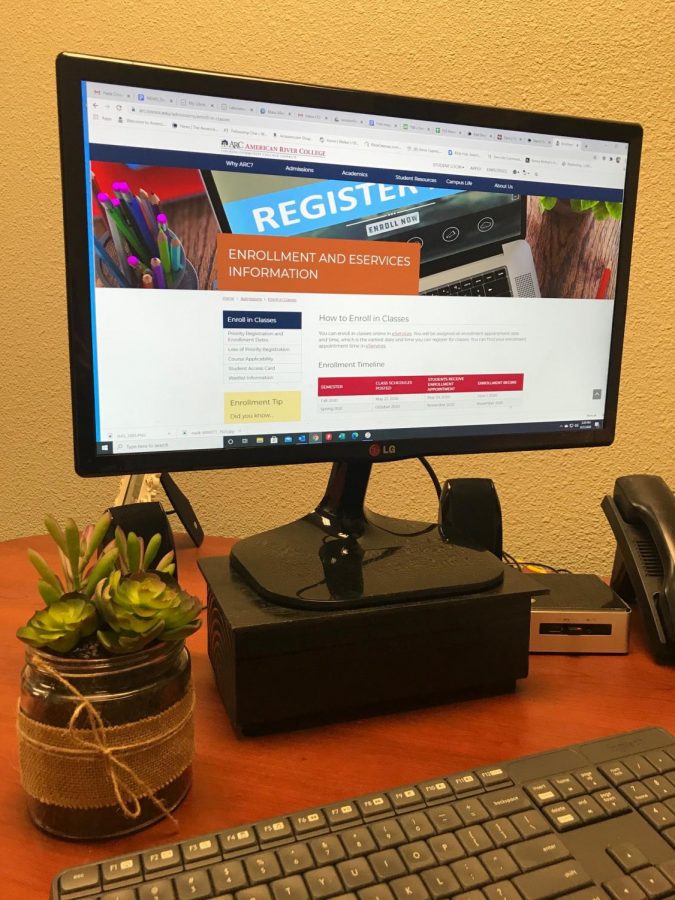 Although some community colleges are experiencing enrollment declines up to 30%, at American River College, enrollment is reported to be about the same as it would be for a typical fall semester, according to Scott Crow, ARC public information officer. (Photo by Ariel Caspar)

The ongoing COVID-19 pandemic has led college campuses nationwide to go online for most of their fall semester course offerings. Many community colleges were expecting increases in enrollment numbers, but according to a report by Inside Higher Ed the opposite has been true, with some colleges reporting up to 30% declines in enrollment numbers according to Scott Crow, American River College’s public information officer.

“Enrollment is down or flat at most California community colleges,” Crow said.

The Channels, a student-run online newspaper for Santa Barbara City College, reported an 8% drop in enrollment compared to fall 2019, with significant decreases of international and out-of-state enrollments. Luz Reyes-Martin, SBCC’s executive director of public relations and communications, said that fall enrollment “has been impacted by COVID-19,” the Channels reported.

The San Francisco Examiner also reported a sharp enrollment decline at City College of San Francisco, which is down 18% for the fall 2020 semester.

According to Crow, ARC has avoided a similar decline in enrollments, but there are other concerns.

“Actual enrollment is about the same as it normally would be during a typical fall semester,” Crow said.

But despite this, the college is “seeing a decrease in the number of classes those students are taking,” he said.

“These numbers vary slightly across our four colleges, but are generally consistent,” Ross said.

According to Ross, COVID-19 is also considered a major factor on student enrollment behaviors ,the full impact of which is not yet known.

“We expect that regional health dynamics or state economic conditions will still be very much in flux in the coming year[s]. Those dynamics will continue to impact student enrollment behaviors,” Ross said.

In addition to the uncertainty brought on by the COVID-19 pandemic, which has infected more than 27 million people and killed almost 900,000 worldwide according to Johns Hopkins University & Medicine, California’s community colleges are facing significant budget cuts.

In May, Inside Higher Ed reported that California governor Gavin Newsom announced a $1.7 billion cut to higher education as part of a broad effort to address a $54.3 billion deficit blamed on the COVID-19 pandemic. California Community Colleges were expected to lose $740 million.

According to a report from EdSource, negotiations with the governor resulted in a state budget that allows K-12 schools and community college districts to maintain current spending levels for 2020-2021. However, funding will be deferred until the 2021-2022 fiscal year, which could lead to larger budget cuts in the future.

“Due to the reduction in state funding, we have been forced to reduce our course offerings taught by adjunct faculty,” Ross said. “Additionally, many of our career education programs that require in-person instruction have been suspended due to public health dynamics.”

In addition to reduced class sections, ARC’s career education programs have also been heavily impacted by the COVID-19 pandemic, according to Crow.

“We have not been able to transition or convert some classes to an online platform,” Crow said. “We are very proud of our faculty in those areas, as they continue to explore innovative ways to meet student needs. Access to education is a primary driver in a local and regional economy, so we of course want to see more students taking classes and succeeding in their programs.”

While the pandemic and budget cuts could have major consequences for LRCCD as a whole in the future, Crow said retention and enrollment have been “a key focus of ARC and the Los Rios district for many years.”

ARC and Cosumnes River College are involved in the Guided Pathways Project as part of these efforts.

According to the project website, Guided Pathways is intended to help refine the career paths for students entering the community college system. The framework that results is designed to help students achieve their educational goals, whether that is to enter the workforce, or transfer to a four-year institution.

“Our Guided Pathways work—including our new HomeBase communities, which were launched this fall – is vital to supporting student success,” Crow said.

While ARC is one of the first two Los Rios campuses to be implementing the Guided Pathways framework, the district is looking to expand the project to all of its campuses. According to Ross, implementation of Guided Pathways throughout Los Rios “is central to our efforts to retain existing students and help them complete their degree or certificate and achieve their academic goal[s].”

In addition, the transition to online learning may also prove beneficial in maintaining enrollment levels and retaining students within the system. According to Ross, the move to online classes will allow current students “to avail themselves of the full course inventory of all four Los Rios colleges, as opposed to being bound by the physical restraints of their ‘home’ campus.”

The expansion in the number of options available to students could also affect student enrollment behaviors.

“It is reasonable to assume that some new students will continue to seek out additional classes because of the opportunity to take classes online,” Ross said.

The full impact of COVID-19, the state budget cuts, and the shift to online learning will not be known in the short term, according to Ross.

“It is too early to know the impacts of the COVID-19 crisis on the spring semester, but we are working hard to mitigate any impacts on students,” Ross said. “These are extraordinary circumstances, and we are incredibly proud of how our students, faculty and staff have adapted to this once-in-a-lifetime situation.”